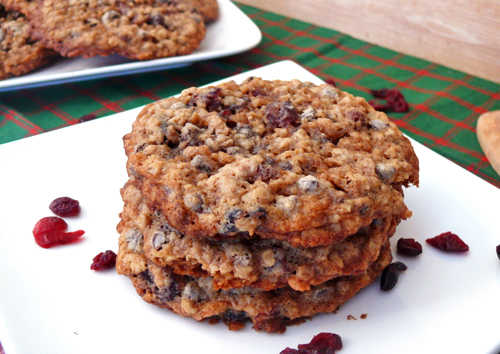 With this recipe, I have decided to take a page out of my own cookbook and use a recipe of my own! This recipe is derived from my Oatmeal Whoopie Pie recipe, but I’ve excluded the “whoopie” part. Don’t get me wrong, the oatmeal whoopie pies are fabulous, but they just don’t scream Christmas and they are much too large! You eat one of these bad boys and you’re set for a week! Anyway, I toned it down a notch with this recipe: keeping them the same size in diameter, but by eliminating the cream filling and sticking mini chocolate chips and cranberries in the batter instead. =)

[sc:adsense1]
Cranberries just scream Christmas to me. Not only can you cook and bake with them, but there are many traditions out there that involve cranberries as decoration. One example for instance is stringing cranberries as garland for a Christmas tree. I know that every year my mom would have my sister and I stringing popcorn and cranberries to go around the tree. No, we couldn’t preserve them for the next year, we had to do it each and every year. Although at the time we weren’t thrilled about the idea of sitting there hours on end stringing stale popcorn and slimy cranberries, it was well worth it in the end because the garland was so beautiful! I’ve decided to steer away from that activity this year. Maybe next year!

Anyway, I love cranberries, but you couldn’t use a fresh cranberry in this recipe. It just wouldn’t come out right (too juicy). Dried cranberries are the perfect substitution. Personally, I think they are better than raisins! Why do people always put raisins in their oatmeal cookies? Dried cranberries are just so much better! I sure lucked out on this recipe because these cookies gave new meaning to Christmas in that I’m pretty sure I will be making them every year, maybe twice a year. Hey they may even start being a weekly occurrence! Yes…they are that good.

When I was originally concocting this recipe, I was going to make a traditional chocolate chip cookie and just add dried cranberries into the mix and at the last minute changed my mind to using oatmeal cookies instead. I am so glad I went with the latter. First of all it just makes more sense, and we’ve been making a lot of variations of chocolate chip cookies here as of late. It was time to mix things up a bit.

I did stick with using chocolate chips though. I used minis because that’s what I had in the cabinet. =) Again, I am trying to use up all of my extras. Speaking of my pantry, I think this is the pantry where food goes to die. I feel like I go to the store and stock up on the ingredients I need, and then when I go to look for them, they disappear! This pantry is like the black hole of death. If I ever have the chance to design my own pantry, it will be the size of my current living room. No kidding. Maybe I’ll organize after writing my post…maybe not. I may never come out alive.

Anyway, we were talking about mini chocolate chips. Be careful with these little guys, they do melt fast because they are so itty bitty. I like that added touch though. It just makes the cookies gooier. And this is exactly how these cookies came out. Besides being humongous (you can tone the size down a notch…I just like large oatmeal cookies), these cookies are the gooiest I’ve made all year and I’m not complaining. That’s just the way we like them.

One last note, if you are like Zach, and you don’t like dried cranberries, don’t fret. Just eliminate them. I made a special little batch for him without the cranberries. I have to be honest and they don’t look or taste as good as the ones with cranberries, but you may disagree if you have an absolutely hatred for the dried fruit. You could always go an substitute in a golden raisin or a date or whatever your little heart desires.