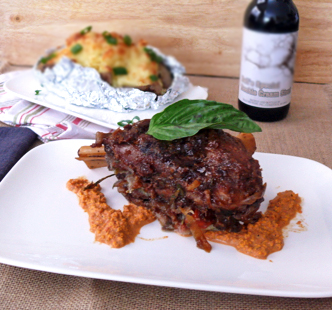 Happy New Year Everyone! Now it’s time to eat! Now I know there are many traditions out there. Growing up, we were the pork and sauerkraut type of people. And although I love sauerkraut, Zach hates the stuff. I tried to make it for him last year, and well that was just completely unsuccessful. He truly does hate the stuff. I was always told that pork (the pig) signified good luck for the new year and the sauerkraut resembled “money” which translated into wealth for the new year. I’m sure many of you have traditions of your own, and maybe they are similar to ours! Well we decided to start a new tradition. We both love lamb and although I have no idea what the heck it is supposed to symbolize, it’s delicious. These Java Stout braised lamb shanks are easy and affordable. If you are looking to splurge without breaking the bank, this recipe is for you.

[sc:adsense1]
Zach and I decided to stay in this year for New Year’s Eve and we weren’t upset about it. We knew we wanted make something delicious and to be honest we would rather splurge on good food and beer rather than spend a ton of money on a pre fixe meal that we aren’t totally in love with. They are never as good as you expect them to be. A lamb shank is a cut of meat that isn’t terribly expensive because it’s usually a tough piece, but if you cook it correctly you can come up with something truly amazing. The only great way to do this is to braise it.

The lamb shank can be super tough. You are never going to get that medium rare quality you want in lamb with the shank, so in order to get the best flavor out of it, you have to braise it. A lot of times you find lamb shanks that have been braised in red wine and it’s not bad at all! It’s actually quite delicious this way. This time we wanted to braise them in beer. We have done some braising before in beer, but never something of this magnitude.

The best way to start out is to marinade them, and I’m not talking “throw it in a plastic bag with some store bought marinade and toss in the fridge for an hour” type of marinading. Take some time and make it count. This is one of the most important steps. You want all of those delicious flavors to seep into the lamb. This can take a couple of hours so start early! Allowing yourself at least 2-3 hours for marinading I think is best, but you can always marinade for longer if you so desire. Braising meat means to roast it low and slow in the oven or on the stove top. You’re looking for well done, but you want it to be SO WELL DONE that it actually falls apart and melts in your mouth.

Another step I find important in this recipe is to make sure you sear the meat before you braise. I find the best way to do this is in a cast iron dutch oven. You can sear and then pop right in the oven. If you don’t have a cast iron dutch oven, just make sure the product your using is oven safe. You want the outside of the meat to get brown and crispy and this really gets the cooking of the meat going. Make sure you don’t skip this step! It’s important!

Now let’s talk about the beer! We went crazy and decided to braise in beer and pair with a different beer! When you are braising in alcohol, make sure it’s something that you would drink, but it’s not totally off the wall expensive. I originally wanted to braise the shanks in Avery’s Rumpkin, but then I decided that I would rather drink it and since it’s a once of year type of thing, I didn’t think it was the smartest idea. We decided to braise in Santa Fe’s Imperial Java Stout. We can get this stout any time of the year. It comes in a can, and we would totally drink it buy itself. It’s important that if you can’t find this stout, you use some type of coffee stout. We paired the shanks with Bell’s Special Double Cream Stout. We would have braised in it, but we can’t always get it since we don’t live in the East. You want a beer with some deep flavor, so any stout or porter will do!

Our shanks came out DELICIOUS! They were moist and tender and packed full of flavor. It’s the perfect slow cooked meal that doesn’t take a ton of dedication to produce something delicious. It’s perfect for a dinner party and isn’t terribly expensive. Give it a try!