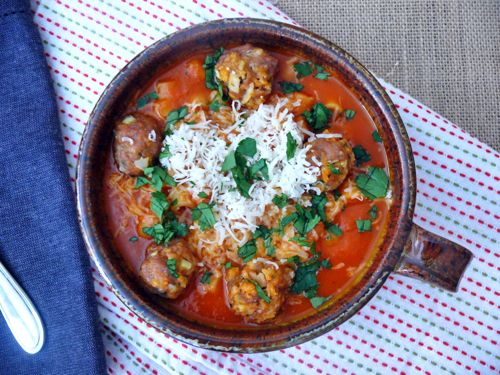 This is what I like to call a “play” on spaghetti and meatballs in a soup form. This wasn’t what I was going for originally. I was actually going for a thinner based soup (almost brothy-like), but it came out much thicker than I originally had hoped. I don’t hate it though. It actually came out better this way! I was pleasantly surprised. This soup was perfect. It’s adapted from our very first recipe post of Rustic Grilled Cheese and Tomato Soup, less the heavy cream of course. Sorry for the lack of the pictures. We were amateurs. We still are amateurs, but we were SUPER amateurs. This tomato soup with ditalini and turkey meatballs is easy, hearty and perfect for a cold winter’s day.

Well, it was…Until I decided I wanted to make soup, and then the temperature jumped to about 50. Funny how things work out that way right? Stupid weather…Anyway, 50 degrees is still cold enough to want soup, so that’s what we did.

This tomato soup recipe is full proof. Whether you make it how we originally made it, with heavy cream, or how we made it last night, without the heavy cream, they both are sure to please. It is sweet enough to tone down the acidity from the tomatoes, but not so sweet that you feel like you’re eating a cake. Tomatoes are tough to find this time of year. Well they’re tough to find FRESH this time of year. In our original recipe, we used fresh roma tomatoes, but that was because we could get them fresh. This time of year, it’s going to be very difficult for you to find produce that is fresh and local. This really just depends on where you live. We don’t have tomatoes in Colorado in the middle of January. Well we do, but they are from Mexico. You get the point. Love Mexico, but we love fresh and local more. This is when you make the switch to canned tomatoes, and there is only one way to go, San Marzano tomatoes from Italy. You’re not going to get a better canned tomato, and sometimes they are even better than the real thing! Sometimes…

We decided to go with a beer that warm, fun and “wintery” for this pairing. Pliny the Elder was the only wise decision. You want bitter with an acidic dish. It definitely tones down the acidity from the tomatoes if you have a hoppier beer. Russian River Brewing brews this wonderful beer, and if you’ve never heard of it then shame on you! Ha just kidding, even though it has become quite popular lately, it still isn’t the easiest beer to get your hands on since Russian River doesn’t brew a ton of it! If you do have a bottle of this lying around, this is perfect for this dish. If you don’t, then try a double IPA or greater. The hoppier the better!

The best thing about this recipe are the turkey meatballs. I was originally just going to go with ham, and do a play on ham and bean soup in a tomato base, but we’re going to save that one for another day. These turkey meatballs are packed full of flavor and the perfect little addition to this soup. They are moist, but slightly crispy on the outside. I think it’s important to keep these little guys small, almost like an Italian Wedding Soup meatball size. You want to be able to pop the whole thing in your mouth, and not have to cut through it. If nothing else, make the meatballs and throw them in a pasta or in a salad. They are even delicious all on their own.

Ditalini is another ingredient that can be substituted. Use any smaller pasta, but make sure to keep it on the smaller size, or you really will have a spaghetti and meatball dish on your hands.