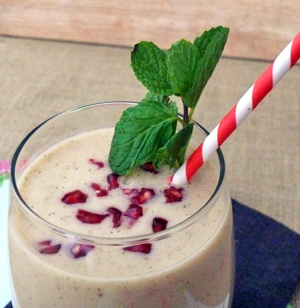 We’re going to do something a little bit different today. I just started running again. I’ve been having some leg issues here as of late and needed a break from the whole thing, but I take it that most of you don’t care. So let’s get to the point. There’s nothing in this world that’s easier to make than a smoothie. Except for maybe making a glass of chocolate milk. That would be easier I guess. Well maybe not. A lot of stirring comes with that one. ANYWAY … What’s so great about making smoothies, is that you can throw just about anything you want into a blender, press a button and call it done in less than a minute. When they are done right, they are so packed full of nutritional value that you ask yourself, why haven’t I done this before? That was so easy! Today we made a Vanilla Mint Smoothie after our run. It was loaded with fun ingredients from pomegranate seeds to baby spinach. I did say the sky’s the limit right? I guess I didn’t. So I’ll say it now. The sky really is the limit.

[sc:adsense1]
This post is going to be short and sweet. Sorry for those of you who absolutely love to read my rants. I know right. I think they are hilarious too. =) Just kidding. I’d probably skip over every paragraph too in order to get to the actual recipe. Which really is the point of this whole thing, right?

Ok, I totally just ranted about ranting…Moving along.

Smoothies are great for really any time of day. They are a great kick start to the day, or a great after workout/run snack. You can put just about anything in a smoothie. I would however draw the line at cheese or cold cuts, but you get the point. Did I just say “cold cuts?” What am I, 90? Holy cow. So, today we combined almond milk, orange juice, orange zest, mint leave, baby spinach, strawberries and more (read below for actual list…it’s a lot to type and time’s a wasting (=). I have explained before how I love eating fresh foods, but smoothies are a different. If you can get the fruit fresh, then sure, be my guest…go fresh, but when it comes to smoothies, frozen fruit is usually best. It’s easier to blend and doesn’t get super mushy. Besides, it’s the dead of winter, how many of you are actually buying fresh GOOD produce? Right, that’s what I thought. It really is horrible this time of year depending on where you live. It is at least horrible hear right now =(. I miss my CSA.

Anyway, if protein powder is your thing, throw that in too. I’ve even been toying around with a banana, almond butter almond milk smoothie, but haven’t gotten it right just yet. Doesn’t that sound amazing? Packed full of protein…that’s what we’re going for here.

Aren’t the straws cute! I searched high and low for these bad boys! Well actually no, they sell them at Bed, Bath and Beyond. I thought they would be much harder to find, but this task caught me by surprise. That never happens! You can also order them online if you want a smaller quantity. Unfortunately the box at Bed, Bath and Beyond only sells them in packs of millions (really just about 100 – but you get it – that’s still a lot of straws).

Well I hope everyone tries this recipe out! Oh and FYI – Don’t pair this with a beer. That would be disgusting. =) Have a great weekend everyone!