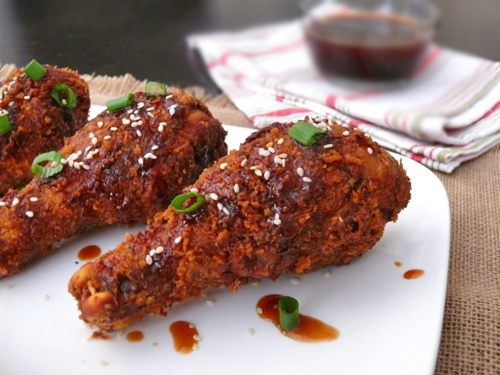 So this is the thing, I was in the supermarket and the drumsticks were staring me in the face. The original idea for this recipe was a traditional wing with an Asian-style wing sauce, but honestly the drumsticks looked so delicious. They were also slightly cheaper in price, which I didn’t quite understand…and still don’t. Oh well. So anyway, I absolutely love how these came out. I also love the idea of being able to serve drumsticks at a Superbowl party. It’s perfect because they aren’t itty bitty like a wing, but they aren’t over the top. You really only need one or two per guest. They are affordable and delectable. You can’t really go wrong there. I think this is the perfect way to end our week dedicated to Superbowl-style foods. This is one recipe you don’t want to skip!

Not to go off topic, but Zach’s birthday was yesterday. We had fun, went out to dinner, visited a new brewery. It was the first time I tackled an ombre cake. I’m not a huge cake baker to begin with. I love making cupcakes and don’t think I’m half bad at it sometimes, but a cake cake: Nope not usually on the top of my list of recipes to tackle. I decided to give it a shot yesterday. A couple of things that I learned:

2. The second thing I learned was that getting the icing just right to make a petal ombre cake is not easy. With that in mind, I abandoned the idea of doing the petal design all together. I decided to make a smoother ombre cake. I don’t hate the idea of it now that the whole ordeal is over.

3. The third thing that I learned, was that to ice an actual cake, you need a TON of icing. If I would have known this, I would have made enough the first time to ice the entire cake. This would have helped when I was heading back to the stand mixer every 10 minutes to make more icing. In the end, the cake was pretty delicious and actually pretty beautiful as well. If I get the guts, I will post a picture sometime soon =).

Well, this has nothing to do with these drumsticks, so let’s get back on topic. Frying chicken sounds easy, but it can sometimes be a daunting task. It took a lot of practice for Zach and I to get “ok” at it before we invested in a deep fryer. The trick is to get the oil to just the right temperature. Once this is accomplished, it’s really pretty difficult to make a mistake. If you plan on frying a lot in the near future, I suggest just going ahead and buying and countertop deep fryer. They are pretty inexpensive and they are so worth it. If this is a once and done type of thing, a stock pot will work just fine. If you have a cast iron stock pot, that will work even better. You will need to invest in a thermometer though.

*Please Note* This recipe, just like many other fried chicken recipes will take some time to marinate: at least 3 hours. So plan accordingly!

The sauce we made for these drumsticks was my favorite part of the whole thing. It’s so sweet yet so spicy. It’s just perfect. I decided to go a little overboard on the sriracha. This amount can certainly be reduced if you are not the spicy type.

We could only think of one way to go with this beer pairing and that was with Rogue’s Morimoto Soba Ale. They just sound like they belong together don’t they?! This ale is refreshing, light and crisp yet robust and nutty. It’s absolutely perfect with chicken, and even more perfect with Asian dishes. So in this instance, it’s a win win situation!