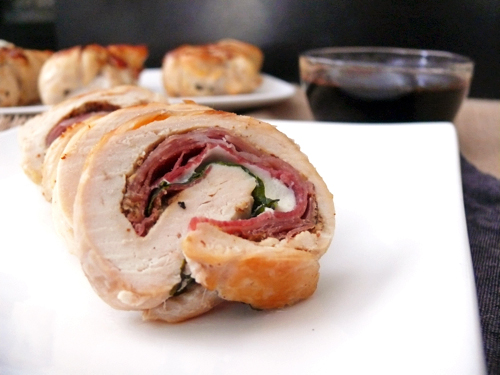 So Zach is sick. We all knew this was going to happen. It does bring me to the conclusion that it was viral which makes me feel better. Well it doesn’t make me feel better that Zach’s sick. That would be mean. It makes me feel better in the sense that I don’t think I had a sinus infection…which is what I had thought I may have had originally; but hey I’m no medical expert. It’s very possible that I had a sinus infection. Oh well. So the point is that Zach’s sick. I almost had to go bury his running shoes in the yard so he wouldn’t go for a run this morning…psycho. Anyway, since he did such a good job taking care of me, I do believe it’s my turn to take care of him. Instead of making soup though, I decided I would go ahead and make a nice hearty meal full of Italian flavors and lots of substance. Although he probably wasn’t able to taste any of it. I know that my tastebuds were pretty much shot when I was sick. I decided to make an Italian-stuffed chicken breast with a dijon, balsamic vinegar sauce. And even though he can’t drink, I did pair this with a beer because I can finely have a beer again! Bahahahahaha…Ok that was mean. So let’s move on.

[sc:adsense1]
I think I’ve baked enough for this week and decided it was time to make something hearty and wintery. I think stuffed chicken screams winter, don’t you think? Throw in some potatoes and veggies and call it Thanksgiving! Well not really, but kind of I guess.

I probably shouldn’t be drinking, but someone had to test out the beer to make sure it actually paired well! Since I’m less sick than Zach is right now, this task got defaulted to me. I’m not complaining. We decided to go with Victory’s Prima Pils for this beer pairing and here is why. We needed something light. There are a lot of flavors going on in this dish and any heavy beer would just not have meshed well. I’m prone to leaning towards the heavier so this is where Zach is so much better at pairing than I am. He was 100% right. The farthest I may go for this pairing is a pale ale. IPA would be too much. A stout or porter is just unthinkable. Victory’s Prima Pils is perfect because all of you can get it! Now that they distribute to Jupiter and back, just about anyone can get their hands on it. It’s a pretty great Pilsner as well and is perfect with Italian-style dishes.

You can really stuff your chicken with whatever meats and cheese you’d like. I just happen to love prosciutto and Zach just happens to love salami and since this dish is mostly for Zach, I decided to add salami into the mix. Cheese is another thing you can substitute. Any melty cheese would be great. Mozzarella was just our choice for the day. Provolone would be another great one: sliced thin of course. Stuffing chicken is one of those things that you could probably think of a different recipe every night for a month. You can stuff anything from pesto to jalapeños to spinach and still get a great dish.

If your wondering what side dishes I made with the chicken, I decided to go simple and make a hearty twice baked potato and a small spinach salad. It was the perfect wintertime meal and was perfectly satisfying. This recipe is perfect for a dinner party because it’s super easy and you can get many done at one time! I’m thinking this may be the star of our next dinner party…if we ever have a dinner party..

I hope all of you are enjoying your Friday and for those of you in the Northeast: stay bundled, stay warm and stay inside! I wish we were getting the snow you are!