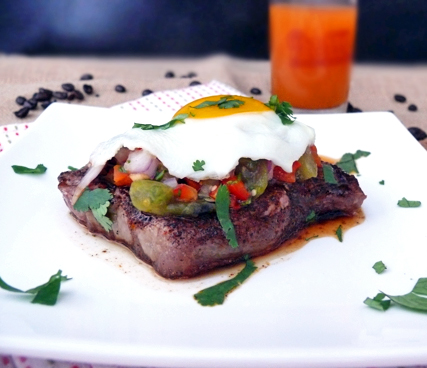 So I’m trying to get Zach into eating eggs. He’s never been much of an egg eater. He says they make him sick, but I’ve seen him eat eggs a couple of times now and he has NOT gotten sick. I think the IDEA of an egg makes him sick, but I will try not to talk about Zach through this entire post…again. =) Steak and eggs is one of those dishes that can be eaten just about any time of the day. I prefer it for dinner though. Unfortunately, I am not a huge breakfast eater…although I love breakfast foods. I usually find myself eating more breakfast foods for dinner than for breakfast. These days though, restaurants are starting to cook with eggs more and more for their main dinner dishes. If they think it’s ok, I think it’s ok too…whoever they may be.

[sc:adsense1]
What makes this steak and eggs recipe so special is that I put a little twist on it. I made a bright and cheerful tomatillo salsa with red pepper, fresno pepper, cilantro, roasted tomatillos and more. I find it extremely important to cook the tomatillos. This is no offense to those of you who enjoy eating them raw. That’s the thing though, when I have tried them raw, they taste just raw. They are different than their good old friend Tomato. I think the best way to get all of the flavor out of them is to roast them. This can be done quite a few different ways. If you have a gas stove you can do it right on top of the burners. No we do not have a gas stove. Funny you should ask…I do believe I’ve ranted about the stupidity that is the electric stove before, so I will not get into it again for fear that I may just lose it once again.

You could also put them under the broiler on high for a couple of minutes, but keep an eye on these little guys. They can burn up in a second. The way we like to roast them is on the grill. They get that nice charred, grill taste and they tend to not go up into flames as they might under the broiler. However, they will go up into flames for a couple of minutes if you don’t remove the husks…only for a minute or two though. It’s actually quite fun to watch. Word of advice though, just remove the husks to make sure; even though they are such a pain in the butt to remove it’s unreal because of their sticky nature.

So I doubt that you care about tomatillos anymore…moving along.

I’m not a diet fan. I may have mentioned this before, but if you are striving for that gluten-free/paleo diet, this recipe is totally for you. No wheat flour, no cheese: just hearty veggies and a nice hunk of steak. I also don’t think you get more paleo than steak and eggs?! Am I right, or am I right?!

Another very special component of this dish is the rub. If you’ve never had a cocoa, coffee based rub on steaks before, boy you are totally missing out. Especially when you make the coating nice and thick, you get this unbelievable crust on your steaks. It is just to die for. The flavors are intense, but totally satisfying. Which brings us to our beer pairing which is also intense, but satisfying.

For you LUCKY LUCKY souls over on the East coast that can get Southern Tier…I hate you. Just kidding, I really do love you, but I hate that we can’t get Southern Tier. I know that I sound super selfish. We live in Colorado. We have some of the best breweries in the country, if not the world, but my love for Southern Tier goes above and beyond. I wish they would just distribute out here already! What’s the big deal?! Put it this way, when we were out there over Thanksgiving, we bought a case of 2XMAS…and yes this case is almost gone. Besides having a fabulous pumpkin beer, a fabulous Christmas beer, a fabulous double IPA, a fabulous pretty much everything they ever brew; their Blackwater series is just one of the best series out there. This brewery goes crazy and they aren’t scared to try new things. I almost like to think of them as The Bruery of the East Coast, but maybe not AS crazy. Southern Tier has yet to make a beer with pineapple…or have they? I’m not sure actually. Let’s just pretend they don’t, so we can move along. We ended up pairing this recipe with Southern Tier’s JAHVA Imperial Coffee Stout, and here is why. We rubbed the steak with espresso powder…Espresso = coffee = coffee stout. You get the point. Coffee goes well with eggs. Eggs = coffee = coffee stout. I think you get what I’m putting down, right? But in all honesty, this beer pairs unbelievably well with this dish. Lucky for you, it gets distributed in March so that’s right around the corner! Also, do yourself a favor and try the other beers in this series.

Hope everyone had a great weekend!