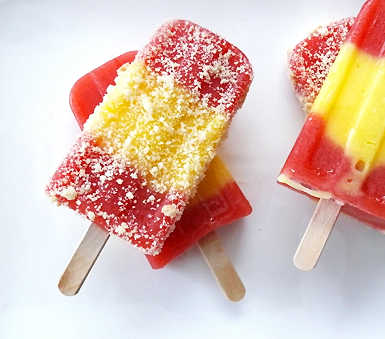 If you couldn’t tell I’m pretty obsessed with my ice pop mold. I think it’s about time I took a little break from making them. I’m starting to run out of room in my freezer! Strawberry shortcake is one of my favorite kinds of cake on the planet. Maybe it’s the fruitiness of them. I don’t know. I do know that this was a frequent request of mine for parties growing up. For this recipe, I decided to transform one of my favorite cakes into an ice pop. They were sooooooo good. They might even be better than cake! I tried to keep them as light as I possible could, but how light can you really get when you are trying to replicate a cake?!

First off, I didn’t pair this with a beer, but don’t worry a beer ice pop is right around the corner. Zach and I are making sausage and spaetzle tonight though, and you better believe that will be paired with a delicious German brew. Anyway. Let’s not get off topic…

Prep time for this recipe says 4 hours and that’s because you have to give the ice pops time to freeze so it’s almost completely inactive time. The freezing for these ice pops is done in increments to get the layers exactly right. We have to have som neat layers right?!

I found that these ice pops were a little bit easier to make than the peanut butter ones. Not that the process was a whole lot easier, but the extracting of the ice pop from the mold was a bit easier, or maybe I’m just becoming an ice pop expert. Who knows. Believe it or not I really think the pudding mix in the recipe really made this ice pop. Weird right? I found that many other recipes out there for strawberry shortcake pops call for pudding mix. At first, I was going to avoid it all together, but at the last minute decided to give it a try. I don’t think I’ve ever in my life bought a package of instant pudding mix, but in this case it was well worth it. I would suggest trying to avoid the artificial stuff though. Your all-natural market should have a good substitute. I was also trying to go for a cheesecake theme, which justifies the use of cream cheese in this recipe. I thought it was the icing on the cake, or in this case the icing on the ice pop.

Another thing that may be an alternative to this recipe is to actually stick the cookie crumbs in the mold. I was worried which is why I didn’t do it. I thought they’d get to soggy in the end, or that they’d fall apart easily. You could always mix the cookie crumbs into the pudding mixture, but then there’s that whole soggy thing again. If anyone tries this method let me know!

Well it’s time to go and prepare for this “storm” they say is headed our way. I hope it dumps at least a foot of snow on us. That would be nice! They usually get things wrong here though, so who the heck knows. I think Zach and I are going to bury ourselves indoors anyway and have an Oscar-nominated film marathon! I hope everyone is having a fantastic weekend! Stay warm for those of you in the line of snow fire!