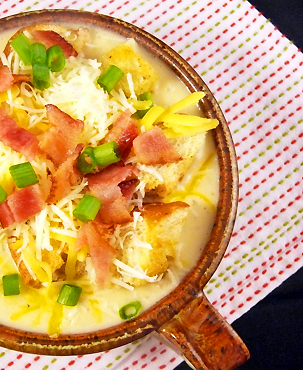 This three cheese potato and leek soup is the perfect weekend comfort food!

The forecasters were finally right! Well not 100% right, but mostly right. We actually ended up getting more snow than we originally had thought we were going to get; which is super exciting since we’ve had some snow this year but not much. Let’s just say Cilantro and Zach loved it equally as much. Somehow the snow has not melted yet. Which is crazy because it doesn’t ever last very long here. I had to make soup. It was just a must, and not just any type of soup, but a heavy, wintery, cheesy soup. I combined two of my favorite soup recipes: cheese potato soup and potato and leek soup. I love leeks and I don’t nearly cook with them enough, so I thought this was the perfect excuse to cook with them. This is one dish I don’t mind eating leftovers for at least a week =).

Soup is honestly one of the only dishes I like to eat leftovers of. I feel like it gets better and better as the days roll on. Maybe this is because I tend to like creamier, heavier soups, and soup tends to thicken as it sits for a couple of days. Otherwise, I’ve been really trying to cook so there aren’t any leftovers.

I understand that a lot of people out there think that using a slow cooker is an easy way out. I tend to disagree with this. I don’t use it too often, but I really do love my slow cooker. I find that it’s no different than putting a stock pot on the stove at the lowest setting possible, or putting your oven on the lowest setting possible to slow roast a cut of meat. You can really develop some really great flavors by allowing things to cook for a long time. Pulled pork is an example of this, and I think soup is the best example. Sure you can whip up a great soup in an hour or two on the stove top, but you are never going to get the great flavors you want if you don’t let the ingredients cook together for a while. I would like to mention, that if you don’t have a slow cooker you can most definitely cook this soup on the stove top in a large stock pot. I would suggest cooking it on low though and for at least 3-4 hours.

I really loaded up this soup. I am a garnish queen I’m not going to lie. The more garnish the better, but I do think I went a little overboard on this one. Let’s recap on the garnishes used:


I know I know. It’s a little out of control. You can use all of these or none of these. It’s totally up to you. They are 100% optional. The croutons are odd, but I had a ton of bread left over and needed to use it up before it went bad…which by the way…if you need to use up bread that’s about to go bad, croutons and bread crumbs are the perfect use. It’s a crazy ton cheaper than buying them, and they taste so much better!

We decided to have fun with this beer pairing and pair it with Victory’s White Monkey. That’s right…White Monkey, not Golden Monkey. This brew is so new that they don’t even have a write up on it yet! Oh, and it is absolutely amazing if you were wondering. If I were going to pair this soup with a wine I would have gone with a Chardonnay of some kind, so you can probably figure out why I decided to go with White Monkey. White Monkey is basically Golden Monkey that has been aged in white wine barrels. Although there is such a small amount of wine in this soup, this beer really elevates it’s taste. It’s a match made in heaven.