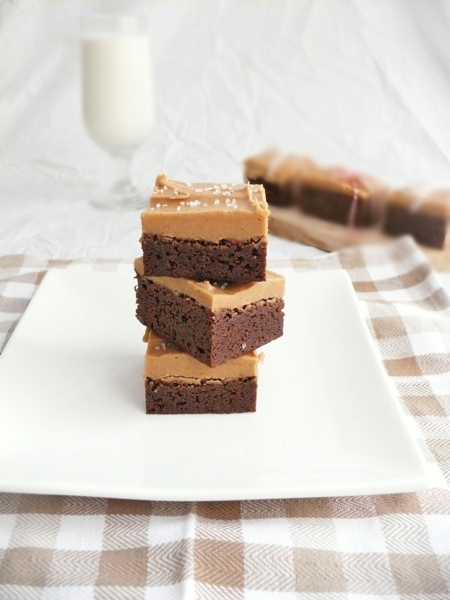 As I was going through past recipes, I realized that I have yet to make brownies! I know right?! They are obviously one of the most delicious baked goods on the planet. I really don’t know what I was thinking by looking these beauties over. This is the problem we have in our house. Sure we love our fair share of sweet goodies, but because there are only two of us, we can never finish everything that I make. I literally still have cookies left over from Christmas that I decided to freeze in hopes that I will think of some creative way to use them. I’m not so sure how that will work out. We’ll see. I’ve really tried to start making less portions of things, but it’s so hard to modify your original recipes! At least I find it difficult, especially with baked goods. I think that this was my first true success at modifying my previous recipe to fit the needs of only two people. Zach has more of a sweet tooth than I do, so I made these brownie bars just for him. Ooey Gooey chocolateyness and creamy peanut butter filling. Top it with some coarse sea salt and you have yourself a super flavor packed brownie.

I don’t know if everyone knows this, but brownies from scratch are about just as easy to make as brownies from the box. I’m not kidding. Don’t get me wrong, I love brownies from the box (Betty Crocker and Duncan Hines have made our lives so much easier while still keeping it tasty). I just don’t think people know exactly how easy they really are to make. The sky is really the limit in the creativity of making brownies. You can make regular chocolate brownies, gluten-free brownies, vanilla brownies. Some people even make brownies with black beans. It’s really totally up to you. This brownie recipe makes your classic homemade brownie with an added kick of stout beer. Hey you need some kind of liquid in there! May as well incorporate some beer! The peanut butter filling is extra special and extra simple. It’s really just like making a peanut butter frosting for your cupcakes, not the kind that you would be able to pipe (it’s too runny), but one that you could spread very easily.

For this beer pairing, we decided to go with Rogue’s Hazelnut Brown Nectar. I feel like going with a simple stout would be taking it a little easy. Besides Rogue’s Hazelnut Brown Nectar is just so so so good. If you’ve never had it tastes exactly like it sounds: delicious. It’s smooth and malty but has that kick of nuttiness that pairs so well with the peanut butter filling in this brownie recipe. I would certainly go no other way with this pairing =)…or you could try a glass of milk or a cup of coffee, but that really doesn’t count, now does it?

Well we have our second “Chopped” challenge tonight for date night, and it’s my turn to whip these strange ingredients into something spectacular. I really think this could end in a disaster! Either way, I should probably start cooking now, since it will probably take me 8 hours to cook =). Good or bad, I will be sure to share my adventure with you tomorrow!