Grilled Eggplant Salad with Mustard Vinaigrette
The Mediterranean Cheese Board 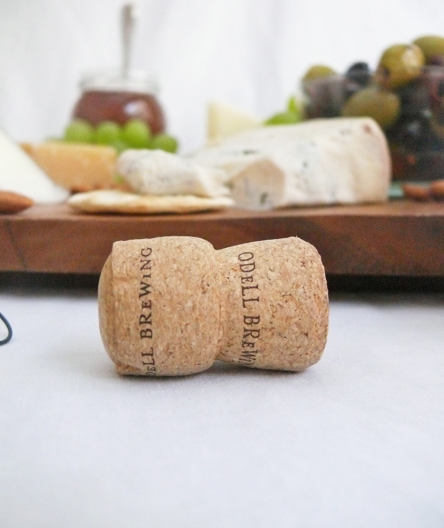 So, I’ve been wanting to pair beer and cheese together for a long time. I just really haven’t had the opportunity to do so. Since Zach and I only have 4 more days left in our current home and are packing like crazy, I thought that my love of cheese boards would be the best thing to tackle this week. By the end of day today, I plan on having most of the kitchen packed up! Have I mentioned that I am beginning to hate packing. Like really really really hate it…Anyway, back to cheese board: they are quick and easy. All they really require is a trip to the grocery store…and maybe…perhaps…your closest bottle shop. Well actually, definitely your closest bottle shop. That is the point of this post right? … Pairing beer with cheese? If you can do it with wine you can for sure do it with beer, and you will be ultimately surprised at how well some of these brews pair with your favorite blocks and wedges.

I was originally going for an Italian cheese board. I wanted to do three separate boards this week, and I thought Italy was the easiest to tackle for the first one. Surprise! It’s really not that easy at all. Cheeses that I thought were Italian were really from Spain. Who knew?! I did learn a lot going through this process and tried to make it a bit easier for everyone else. Instead of calling this an Italian Cheese Board, I decided to go with a Mediterranean Cheese Board. I used two cheeses whose history begins in Italy, and two other cheeses whose history begins in Spain. All four of these cheeses aren’t the lightest cheeses in the world. They are very rich. I’m sure most of you have had a piece of Parmesan Reggiano. With this cheese, the longer it is aged the better; also, the longer it is aged the more expensive it gets. I like to wait until these cheeses go on sale at your local cheese shop or grocery store. The Whole Foods near us puts it on sale at least once a month. It doesn’t hurt so much to buy it when it’s on sale =).

If you are entertaining with these cheeses and you’ve never had them before, I would suggest trying them out before hand. It’s important to know what you’re serving and the only way to do this is to taste them first. Many of these cheeses can be purchased in itty bitty blocks: perfect for tasters. If you’re supermarket is friendly enough (like ours is), many of them will let you try before you buy. My personal favorite is the drunken goat. Why is this? Because it’s brused with wines during it’s curing, and you can taste that rich, wine flavor in every single bite. It’s absolutely amazing.

It’s also very necessary to have garnishes, but you don’t want it to be out of control. The cheese should be the star and the garnishes should be in the background. You shouldn’t need very much at all, so don’t go overboard.

What we used down to the nitty gritty:

1/4 lb of Parmesan Reggiano (Italian): A skimmed cow’s milk cheese that is very sweet and fruity. Strong and rich, but not overpowering.

1/4 lb of Dolce Gorgonzola (Italian): A cow’s milk cheese with a buttery, soft texture. Usually has a light green molding. It is best eaten in small doses or melted on top of your favorite ribeye.

1/4 lb of Drunken Goat Cheese (with edible rind) (Spain): A goat’s milk cheese that is washed and brushed with local wines during it’s curing. It’s semi-soft, rich, fine-texture and has a creamy flavor/aftertaste.

You will also need:

a handful of pitted olives

a handful of green grapes (they were on sale … the red and purple were extremely expensive! I have yet to figure out why!)

a handful of toasted almonds

What I think the most important part of the cheese board is what you pair it with. We all know that these cheeses go great with your favorite bottles of reds and whites. I decided that I wanted to pair these boards with beer. What about your guests that don’t like wine? I don’t know why they don’t like a great glass of wine, but to each their own. There are a ton of great beers out there that have been aged in wine barrels, and there are also some great barley wines out there too. They both pair extremely well with cheese. I have decided to pair this first board with Odell Brewing’s Deconstruction Golden Ale. I love a good beer that has hints of wine, and this beer is the perfect example! It is fruity, and sweet but it also has notes of spiciness: the kind of spiciness that makes you pucker your lips for just a second. It’s perfect with these cheeses, but be careful it isn’t the weakest beer in the world! It will knock you off your feet if you aren’t careful!

Fun fact: Did you know that cheeses from the Mediterranean region are just like wine? For example, a chianti can not be called a chianti unless it’s from a certain region in the world. Same goes for ports, merlots and you get the picture right? Well cheeses are the same. For instance, Parmesan Reggiano can not be called as such unless it comes from a certain region WITHIN Parma, Italy. Pretty cool, huh?

Tomorrow we’re putting together a Farmstead Cheese Board, and no, I will not have farmer’s cheese on the board, even though it is one of my favorite “cheaper” cheeses. Enjoy!