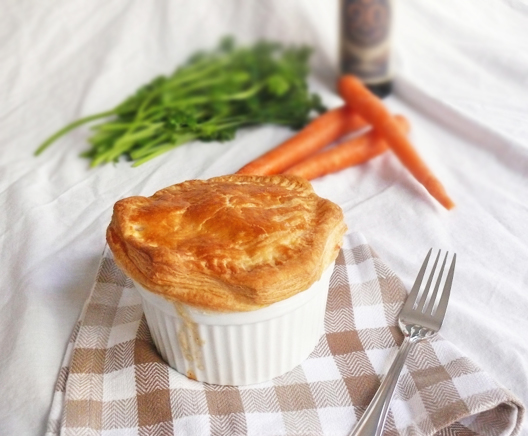 Vegetarian pot pies are the perfect way to impress your guests at your next dinner party!

Zach and I have been experimenting with more vegetarian dishes here lately. We wanted to cut back on meat for a variety of reasons; one of which being that the good, humanely raised meat out there is incredibly expensive. Instead of just settling for the not so good stuff, we decided to splurge every once in a while on the good stuff. As a result, we bring you our attempt at veggie pot pies! They actually came out pretty fantastic, extremely flavorful, and insanely addicting! We paired it with Odell Brewing’s delicious 90 Shilling, and we were more than pleased with our Sunday dinner. It was hearty and filling, and I wouldn’t be surprised if we were suffering from a serious food coma here in a couple of hours. Oh and I may or may not have made enough to feed a small army, so if you are in the need of some veggie pot pies, let me know because, if not, Zach and I may be eating it for 5 days.What makes this recipe so delicious is the multitude of veggies we decided to incorporate. I did not skimp on this recipe and I’m pretty happy that I decided to make this choice. Despite it just being the end of Winter, the grocery store’s selection of produce looked pretty good today. With onions, leeks, fennel and more, the flavors from this pot pie literally explode in your mouth. You wouldn’t even know that you are missing the chicken (that often comes with eating a pot pie).

One thing that I DID decide to skimp on today was the crust. I wasn’t fond of the idea of going ahead and making a homemade dough for the crust. It just didn’t seem necessary for this recipe. If you are inclined to do this, then sure be my guest! There are a lot of great recipes out there for homemade pot pie crust! There are, however, some great pre-made doughs out there for crusts for these sorts of recipes. Puff pastry and refrigerated pie dough are just two of these doughs. I may have mentioned before that I am not a huge fan of pre-made food items, but puff pastry and pie dough are just two exceptions to my rule (oh and Annie’s Mac and Cheese tends to make it into this house…but shhhhh don’t tell anyone (=). Zach didn’t seem to care in the end and neither did I.

We may have paired recipes with Odell Brewing’s 90 Shilling Ale before, but we just couldn’t go any other way. It’s not your typical Amber Ale. It’s extremely full-bodied (even though it’s not super high in alcohol content), and pot pies tend to be “full-bodied” as well. The two just go hand in hand, and any day we can open a 90 Shilling is a good day in our lives =).

We hope everyone had a fabulous weekend. Please enjoy the rest of it! 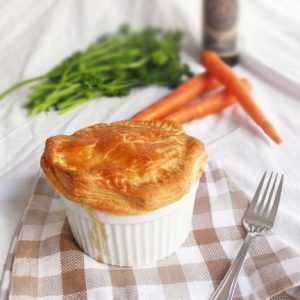