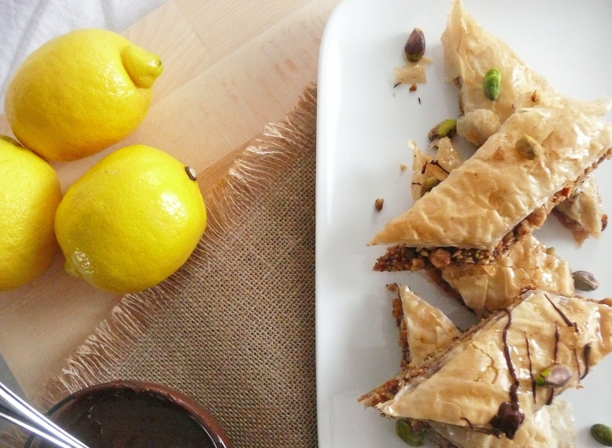 We thought that baklava would be a great way to end this week that has been almost fully comprised of Greek-inspired foods. We sent Zach’s mom off early this morning and we were very sad to see her go, but we had such a great couple of weeks! Utah was fabulous and despite the snow (which she was not too happy about), I think she had a fabulous time. So let’s talk pastry. Like many of these other Greek-inspired dishes, I have never actually made it…until yesterday that is. Let’s just say it was a lot more time consuming than I had thought! Phyllo dough isn’t the EASIEST thing to work with and making this Greek treat took a lot more patience than I was expecting! It’s totally ok though because it came out absolutely delicious! I thought I’d jazz it up with a little bit of chocolate at the end, which may not be COMPLETELY traditional. I thought it was totally worth it though because when is chocolate not totally worth it?

I think the best thing to keep in mind while making baklava is that it does not have to be perfect. It’s more than likely going to taste the same any way you construct it, unless you totally screw it up. I don’t know how you could possibly do this, but I guess anything is possible. I’ve looked at many recipes to inspire my own and took a few tips from all I have looked at. Some use more phyllo at the first layer. Some use more on the top layer. Some use an even amount. Some don’t put lemon in their glaze on top. Some go a little overboard. In my case, I think I went a little overboard =). I think it’s like any other recipe that has traveled over to the United States by way of early immigration. These recipes have been passed down over many generations. Every family makes it their own special way. It’s like the red sauce that comes from Italy. Every family thinks they have the best recipe and that their way is the right way to do it. In the end, I think that if it tastes good, it’s a success =). I do, however, appreciate the tradition that comes along with it!

Baklava can be constructed in just a couple of easy, yet time consuming steps. It’s necessary to keep the phyllo dough moist when it has defrosted so it won’t dry out. I found that the best way to do this is to cover it with a damp paper towel as you prepare the other ingredients.

Here are some things that I learned while making it:

1. Make sure that you heavily grease your baking dish. IT WILL STICK.

2. Be very careful with the phyllo dough. It will tear.

3. I use a TON of butter in this recipe. I like my phyllo dough to be super crispy and buttery. Adjust this to your taste preferences. Just know that, either way, each sheet must by buttered to some extent.

4. I used more nuts and cinnamon than your average recipe, but the filling is my favorite part. This can also be altered. The additions of nutmeg, allspice and clove are always welcome as well! I chose not to go down that route this time.

5. I found the scoring component one of the most important parts of making baklava. In the end, I totally appreciated that I had done it earlier. It makes cutting the baklava much easier in the end, so don’t skip this step!

6. And last but certainly not least, my oven, for some reason, does not get as hot as others. Either that or baking at altitude always takes a little bit longer. Either way, it took me a little bit longer for it to be completely cooked through, puffed up and golden brown. Adjust your timing accordingly. It should however take no more than 40 minutes to bake to perfection.

We so had to pair this pastry with a nutty beer. It only seemed completely necessary. Mammoth Brewing Company’s Double Nut Brown is such a great beer, and it is so flavorful. It has a very chocolatey flavor with hints of coffee and nuts. It is the perfect dessert beer.

Guess what! We have another large weather system heading our way next Monday! Guess what else! It’s supposed to bring along more snow! It’s becoming a bit redundant don’t you think? This seems to be happening every Monday! Expect a lot of warm dishes and soups coming your way this weekend and week as winter continues through April =).