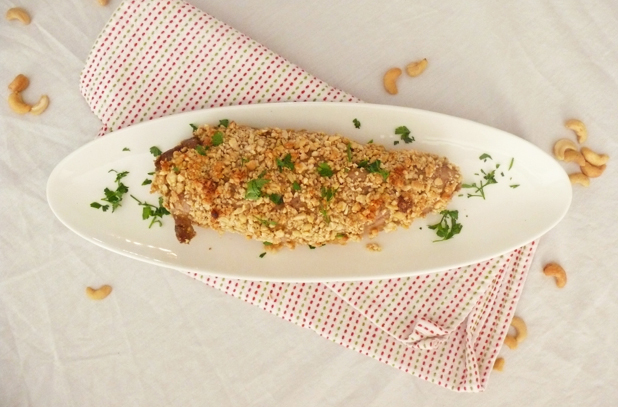 Did I mention that I love Sprouts Farmer’s Market? Maybe I did, but I’m going to say it again. I love Sprouts. We got some great items yesterday for the ENTIRE week and didn’t break the bank! I’m hoping this love affair with this grocery store doesn’t end any time soon because I am officially obsessed. They had this great cut of pork tenderloin yesterday, and I just had to do something with it. We don’t have pork tenderloin very often, and it’s always a fun splurge when we do. Whilst I was prepping our food for the week yesterday, and eyeing up all of the nuts we had just bought, I knew that I had to incorporate them some how into the recipe. I took a little guidance from a trusty cookbook I often like to reference and it came out spectacular! Perfectly pink, perfectly delicious. We paired it with a delicious beer and were completely satisfied and fat for the rest of our Sunday.

So what did you do on your Sunday? This is what I did:

I’ve been reading a lot lately on how it’s a good idea to prep your breakfasts, lunches and snacks for the week before the week even begins. This helps to keep you on the route to eating healthier during the week. Often, we are in such a rush that we turn to whatever we can get our hands on, and sometimes those things aren’t so good for us. I love this idea, and I’m so happy that we started doing it. This is our first week, so I will keep you guys posted on what we go through quickly and what unfortunately goes to waste. Hopefully none of it will go to waste! If it works out as I’m hoping, I will start doing a weekly post on the snacks I prepare for the upcoming week. This week, however, will only be a trial, so be patient. I know all of you are just itching for more information! Ha, maybe not…

So, back to pork…This pork tenderloin has to be one of the best pork tenderloins I’ve ever made. Yup, it was that successul. I don’t really mean to toot my own horn or anything, but there was absolutely nothing left. We ate the whole thing, and this thing wasn’t small either. Let’s just say, we were very fat and happy when we were finished; and by fat, I mean completely unable to move from the sofa. This is how you are supposed to spend your Sunday evenings though right? Zach and I were so busy yesterday, I think that we deserved it. Zach painted some accent walls for me because he’s the absolute best, and I was cooking all…day…long. If I don’t have to look at a carrot in a week, I will be more than pleased. Now that I really think about it though, I’m pretty sure that I have three recipes planned for the week that involve carrots. Hey, they were on sale! Only makes perfect sense.

I know there is a lot of discussion going around on the doneness of how pork should be cooked. A couple of years ago, I was in Vegas eating at Bobby Flay’s Mesa Grill and had ordered a pork tenderloin dish. Up until this time, I had always ordered pork nothing other than well done. I actually hardly ever ordered it because well done pork tenderloin is like chewing on rubber and is just not very tasty at all. The server insisted on ordering it ONLY if it was ordered medium to medium-well. We were told that as long as it is a fresh, hormone-free, good cut of meat there is absolutely no health hazard. I took the server’s advice and I haven’t looked back since. I understand that many of you out there are still nervous about eating pork anything other than well done, and that is perfectly ok. In the end, you just get so much more flavor when it’s cooked a little bit less. If you are considering trying it out, just make sure it is GOOD meat. This is very very important. In this case, the little bit more that you pay for it, the better. Read the labels and educate yourself.

Well we were in a liquor mart in Boulder the other day, and a little gem caught us by surprise. They had Sierra Nevada’s Dubbel: Ovila. Yes, if you are wondering they do have a Quad too, but this store happened to have the Dubbel. They were selling it for such an amazing price. We just had to pick some up. This beer is totally solid. It’s sweet and malty, and perfect with pork. When I think of pork, the first ingredients I think to cook with are apples, raisins and stuffing. This beer has those subtle hints of dried fruits and caramel. It’s the absolute perfect pairing and such a great brew. Try it out, and if you are feeling extra ambitious and are able to find the Quad, try that too!