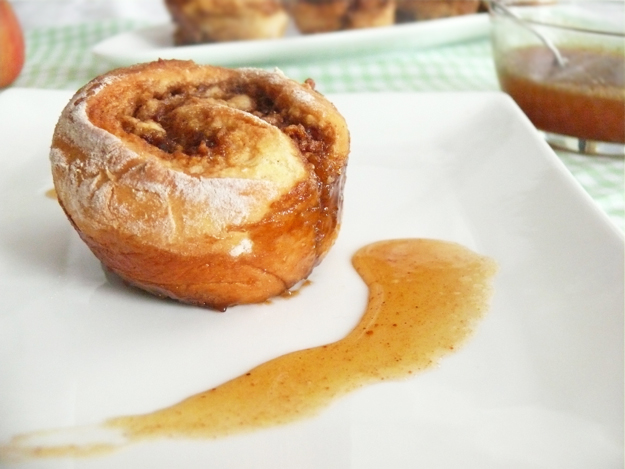 These are a “I made them for no other reason than I was really craving a cinnamon roll” muffin. Do you ever just wake up and you are craving something that you usually don’t crave? I blame it on a night of consuming a couple of more beers than normal. This action always seems to do strange things to me the following morning. I’ve never had much success with cinnamon rolls. They always come out a big, gooey mess. They are especially difficult when you make them from scratch. I think many go-to cinnamon roll recipes involve a store bought crescent roll dough. I would have totally gone this route, if I had this dough lying around, but I didn’t and I certainly didn’t feel like going to the store. What kind of sense would that make on a Sunday morning? Well my cinnamon roll muffins still totally came out a big, gooey mess, but I was able to salvage a couple of “good-looking” ones. I have to admit, they were still absolutely scrumptious! My oven on the other hand was not as happy, since the bottom of my oven is now covered in a burnt cinnamon and sugar concoction. We will get to cleaning that a little later I think.

Everyone. Meet Pippa. Isn’t she just adorable =). She is also a … terror, but who cares since she is cute. Her and Cilantro ALMOST love each other!

Like I was saying, I usually make a big mess when I make cinnamon rolls. I think that if you decide to try out this recipe, then line the bottom rack of your oven with either foil, or a large baking sheet (just in case the filling oozes out over the sides of the muffin tin). I should have taken a picture of my muffin pan after the rolls came out of the oven. I was a little embarrassed by the look of it though, so I decided to save you from that horrible visual =). This is why I decided to use a muffin tin in the first place. I thought it would help, since every time I make them in a pie dish, they ooze all over the place. Quite the common occurrence, don’t you think? Don’t let this deter you. They are really worth it in the end, even if they don’t look so hot =).

Try a delicious beer for this beer pairing. Dogfish Head’s Brown Ale: Raison D’Etre is absolutely incredible and the perfect dessert beer. It’s also the perfect breakfast beer, if you decide to go that route…But anyway, this beer is brewed with raisins and beet sugar. You can’t really go wrong with that combination. Now that I think of it, I should have totally put raisins in this recipe, but oh well, can’t have it all! Next time!

Oh, and the nutmeg…

Oh right and that little thing we like to call sugar…a lot of sugar.

Oh and butter…but we can stop there for now. I think that’s enough persuasion for one day. It’s Sunday, so I’ll try to keep it cool.

…and by cool, I guess that means I’m calling it a day. I think a new cookbook, a latte and reruns of Parks and Recreation sounds like the best way to spend the rest of my Sunday!