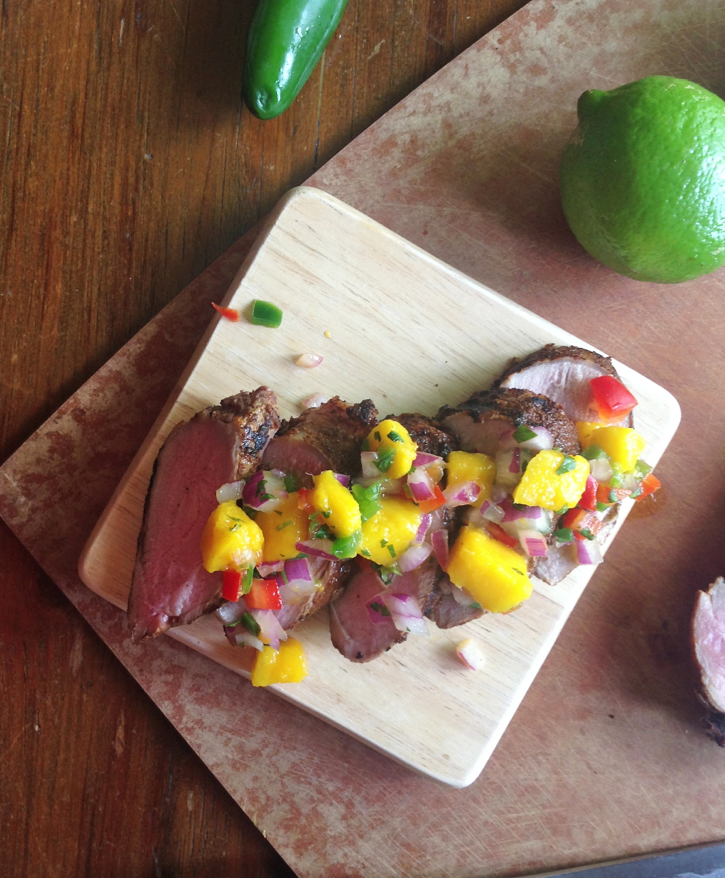 Hi everyone! It’s been so long! Really, it has been way too long. I’m so sorry for my absence these past two weeks. Everything has been out of control crazy. I am currently visiting family in NJ, but I haven’t forgotten about all of you. As you may have noticed, I delegated some tasks out to Zach this past weekend and he totally didn’t disappoint! I was actually pleasantly surprised on some of the creative recipes he was able to whip up; especially his Patriotic Peanut Butter Cookies. He literally had my mouth watering with those cute little cookies. He better save me some! So like I said, I am currently visiting my parents. Since they are very much into this Paleo diet, I decided to go with the flow and make something that they would enjoy. Also, it was my dad’s birthday yesterday; so double reason to make something that they would enjoy. I took a little bit of inspiration from Zach on this one and followed his recipe for chili rubbed pork tenderloin. I then topped it with a spectacular spicy, mango salsa and paired it with a fresh watermelon and avocado salad (that post to come later in the week). I think the end result had everyone wanting more. Too bad everyone was too stuffed to even attempt a second helping!

I stole this picture from Zach. Shhh, don’t tell! I just really liked it. Mine came out looking the same way, I swear.

At first, I thought it was going to be difficult to cook specifically Paleo. It would be so hard for me to go totally Paleo, but I do appreciate what my parents are trying to do. I was pleasantly surprised how easy it was to whip up something special. A lot of the diet is just making sure to cook with fresh ingredients, which isn’t really hard for me to do since I do it most of the time anyway. As far as the dinner is concerned, I made the pork dish (recipe below), a watermelon and avocado salad with a white balsamic vinaigrette and brussel sprouts (they love their brussel sprouts!) with bacon (of course!). Don’t worry these recipes will be up in the next couple of days. I know that all of you are just on the edge of your seats in anticipation for good food! It’s ok, this is a common theme in my house too.

So yea, it was just as good as it sounds. I promise.

Pork isn’t the easiest thing to get right. So many people overcook it and I understand why. The thought of eating “pink” pork can be scary, but really it’s perfectly safe these days. In fact, the USDA lowered the temperature in which pork loin is safe to eat to 145 degrees F (which is right around medium). I was never a huge fan of pork, until I had it cooked this way. Now, I just can’t get enough of it. We like to cook pork tenderloin on the grill. With the crust you develop from the spice rub, it’s really the best (and only) way to go. You get a juicy center, with a crispy crust. It’s perfect. When Zach made the pork for his tacos the other night, it only took about 15 minutes for the pork to cook through. It took me about 30 minutes last night. This is going to vary for everyone, so keep a close eye on them and be sure to use a meat thermometer. You always get the best results that way!

Let’s get to my favorite part: Beer!! Since I am currently in an area that actually gets 21st Amendement, I decided to go with their IPA. I know, it totally doesn’t make any sense. 21st Amendment is on the West coast. Living in Colorado, we are closer to California, yet they don’t distribute to us. It’s sad really. We love their beer. It does make us appreciate it that much more when we do get it though! So 21st Amendment’s Brew Free! or Die IPA was the only way to go. It is just perfect guys. If you are lucky enough to live in an area where they distribute, please please try out one of their brews. Anything I’ve ever had from them has been spectacular. IPAs go great with spicy food (I may have mentioned this before). It’s the perfect flavor enhancer and only helps to compliment this dish.

I hope everyone is enjoying their short work weeks! Have a great day!