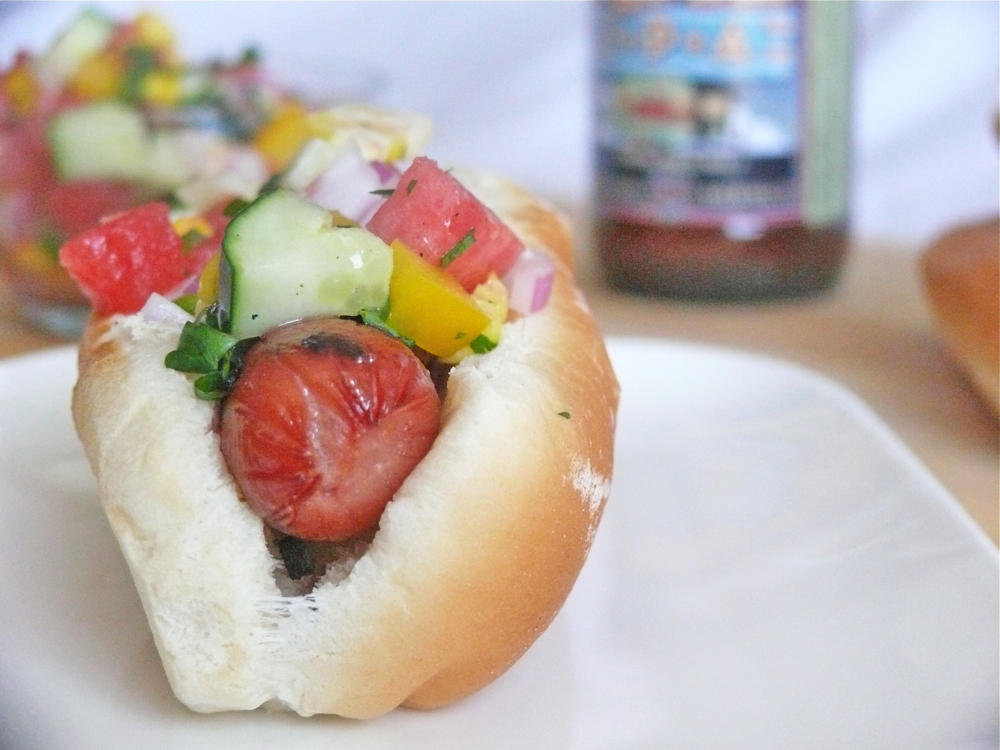 Yes, I made it back safe and sound from the East coast. Thank you so much for asking! It was such a great visit, but I’m also happy to be getting back into the groove of things! Also, I missed you all like crazy! … and Cilantro. I really, really missed Cilantro (and Zach too of course (=). I was so grateful to have come home to beautiful weather. So what coincides with beautiful weather? Beautiful Summertime food, that’s what! These chicken dogs are just magical. I understand that you may be wary of the fact that we topped these chicken dogs with a watermelon salsa, but don’t be! The flavor combinations are just glorious! Try it out. You will see that it isn’t as scary as it sounds!

Zach did such a great job filling in while I was away don’t you think? He made some great dishes that I’m super jealous about. I’m also super mad I couldn’t try them out! I’ll just have to talk him into making them again =). If you missed out on some of his recipes, you can check them out at any of the following links. I think the Patriotic Peanut Butter Cookies were my favorite, but I may just be a tad biased since he saved me some. He’s such a good boyfriend.

I have to be honest, they ALL have my mouth watering!

One thing I just love about the summer, is the BBQ/picnic season. The 4th of July has to be one of my all-time favorites. This is mostly because the food is usually just so absolutely delicious. The smells are pretty good also =). They kind of go hand and hand though don’t you think? Hot dogs just SCREAM “summer,” and chicken dogs are one of the best out there (in my opinion of course). They seem to be making more and more of an appearance at our local grocery stores, and I’m super excited about it. I think it was just a year ago when we had to go out searching for them because at the time, only 1-2 stores sold them. Now you can find them just about anywhere, and don’t worry they are usually nitrate/preservative free. Make sure you get the all-natural dogs!

Don’t worry, I was wary too when I came to the conclusion that I really really wanted watermelon with my chicken dog, but once I tried it out, it confirmed my suspicions. The flavors just compliment each other. It’s really tough to explain. Maybe it’s the sweet and salty thing going on. I’m not quite sure, but trust me when I say they are amazing! I’d throw a habanero or two in there if you want a little more of a spice factor.

The beer we decided to go with on this pairing was Boulevard Brewing Company’s Single-Wide IPA. I had to go with an IPA because IPAs tend to compliment warm weather. This beer is an American IPA. So it’s citrusy and fruity. It is crisp yet hoppy and perfect with with the spicy watermelon salsa. Boulevard Brewing Company always provides in flavor, so please try out one of their brews. You won’t be disappointed!

We had baked beans with our chicken dogs, and that post will be up tomorrow. However, don’t make any judgements quite yet! This isn’t your ordinary baked bean recipe! Have a great evening everyone!