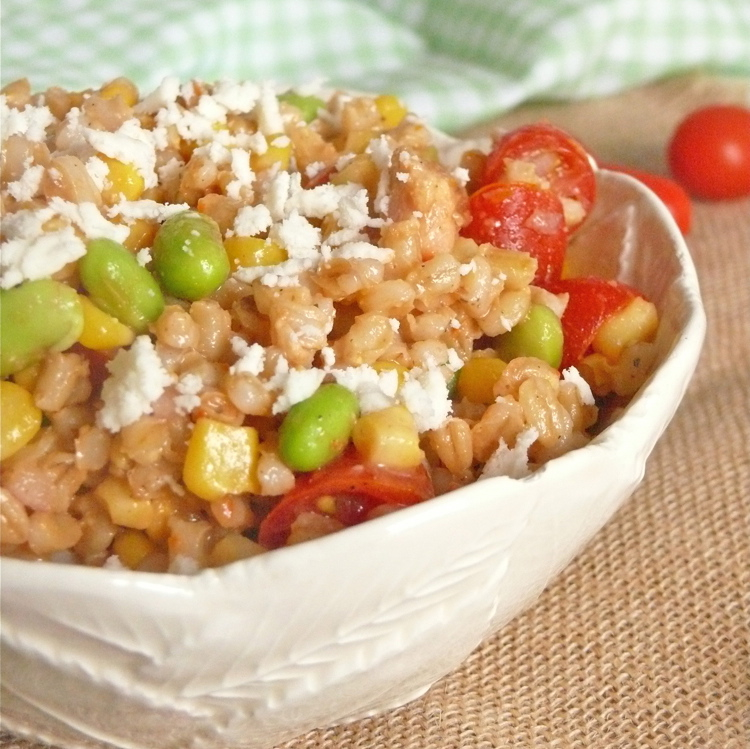 Let’s talk barley shall we? I really feel bad for the poor little grain. He so often gets the cold shoulder! I feel like the second someone looks at the packaging on raw barley and finds that it has to cook for at least an hour, it’s immediately placed back on the shelf. Yes of coures there is quick-cooking barley, but it’s seriously not the same, and if you have the time I suggest whipping up a batch sometime soon! This cold barley salad is the perfect summertime side dish. It’s tossed with some great veggies and topped off with a fabulous basil vinaigrette. It really can be served hot or cold, but I think it tastes much better cold. I obviously couldn’t resist pairing this dish with a barleywine-style ale, and I am currently obsessed with Avery’s Dry-Hopped Barleywine Style Ale Hog Heaven. You’ll know why soon, I promise.

Just like any other cold summer salad, the options in what to add to a cold barley salad are limitless. You can throw in any veggies that you like and toss with any vinaigrette that you like! That sounds like a win-win situation in my book. I would even go as far as saying that you could go ahead and use a store-bought vinaigrette, even though it pains me so much to say so. In this recipe I went with what I had sitting in the freezer. I had some frozen corn kernels and shelled soy beans calling out to me, begging to be cooked. I also mentioned last week that we have herbs galore right now, so I knew I had to make a super duper herby vinaigrette. In all honesty though, get creative with this one. It’s really hard to screw it up.

As for beer, I went with a barleywine for obvious reasons and my new obsession is Avery’s Dry-Hopped Barleywine Style Ale Hog Heaven. Every time we visit the brewery (which is totally our favorite right now because they always have something SPECTACULAR on tap), I get a taster of Hog Heaven because it is just so absolutely scrumptious. It is a dry-hopped barleywine so yeah it’s pretty hoppy, but it still has those subtle sweet notes that you so often crave with a barleywine style ale. Although, I would most often pair beers like this one with something “desserty,” I just couldn’t resist.

Well Zach and I are headed into the mountains for a couple of days for some camping fun, but I will be back on Thursday with the perfect dessert for your upcoming 4th of July picnics. I know that you all are super stressing about it =). Have a great day everyone!