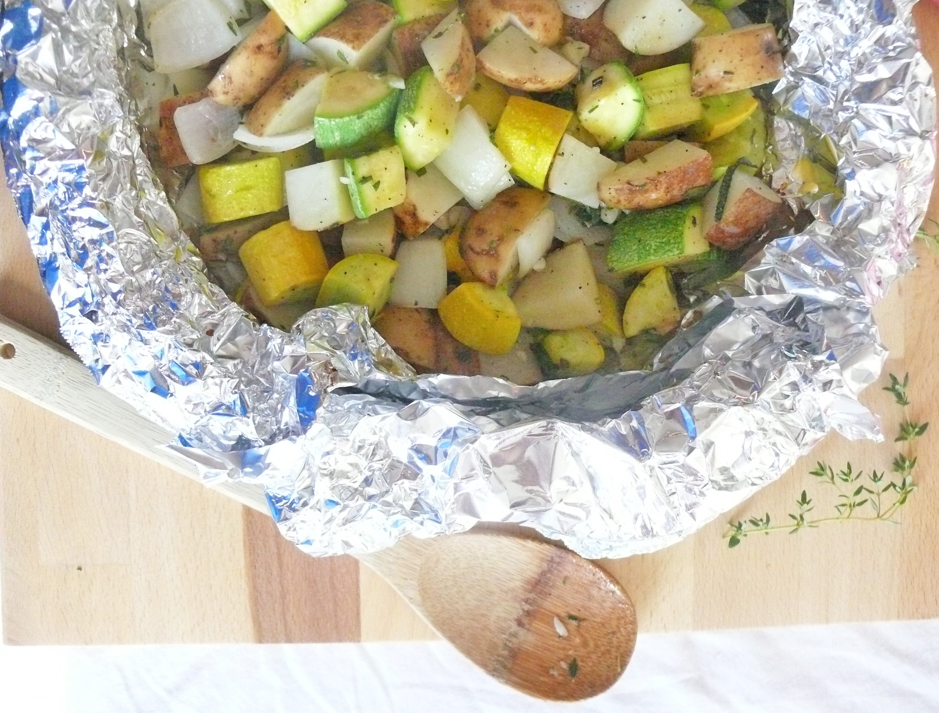 Continuing on with all of the great recipes I love on the grill, we decided to make roasted potatoes on the grill last night. I get bored with just potatoes though, so we threw some other “yummies” into the mix as well. Squash is one of those summertime veggies that I just can’t get enough of, so when I saw summer squash at the grocery store for super, super cheap, I knew that I had to throw them into the mix. Somehow, everything just takes better when it’s cooked on the grill (unless you burn it to a crisp of course – I suggest not doing this). It also cooks a lot faster too! These “on the grill” potatoes and veggies were just spectacular. With a little toss in some olive oil, salt, pepper and some fresh herbs, they were light yet packed full of flavor. That’s all you really need in this recipe, since the other ingredients are just so flavorful. Oh and the beer pairing? You certainly don’t want to miss out on this one!

The beer pairing is my favorite part about this recipe. Any time I see a beer that’s brewed with a “unique” ingredient, I just have to have it. This beer was no different. One day, a couple of months ago, Zach and I spotted a unique little number just sitting on the shelf at the liquor store: Elysian Brewing’s Ruin Rosemary Agave IPA. Yup you heard me…

Rosemary in the beer…Rosemary in the grilled veggies. It was a win, win situation. This beer was magical. The saddest thing about this beer was that it was only brewed once. Why do they always have to do this!? Ugh, it’s like you find a new favorite beer and they just take it away…just like that. There is hope though. Elysian also brews Rosemary’s Baby. This is also a limited brew, but you may be able to get your hands on one of these…someday. If you are at a loss and can’t find either of these brews, try to find something brewed with a special herb. There are so many “herby” beers making their way on to liquor mart shelves these days. Lavender is one that I’ve seen a lot of. Be patient! I’m sure you will find something delectable!

I think I’ve talked about beer enough for one day…

This recipe is a great side dish to accompany all of your BBQ favorites. It is so simple to make and the end result is fresh and satisfying. Don’t forget the beer though! This is the most important part! I hope everyone had a great week. Have a great weekend! I know we will!