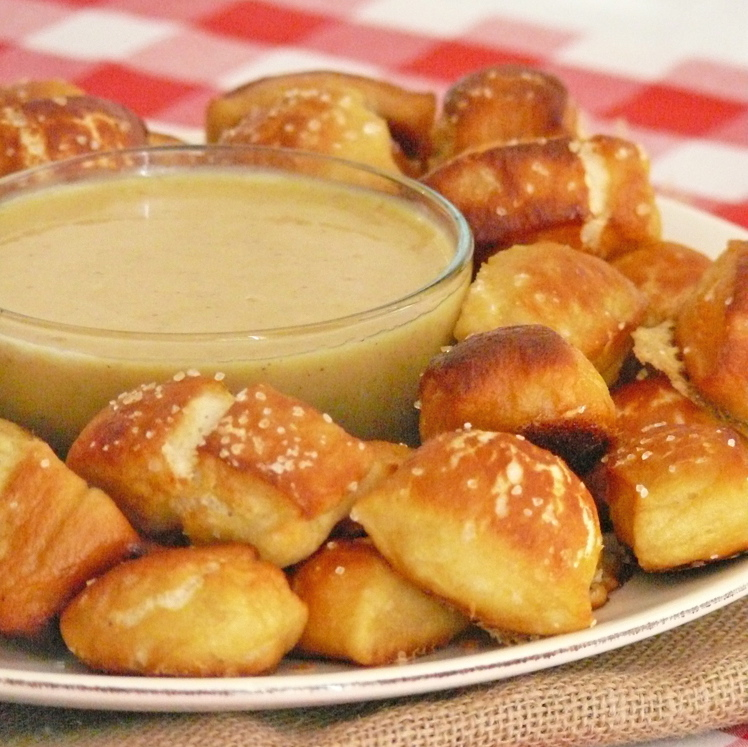 There are few things more satisfying than a really great homemade soft pretzel. After our backpacking trip, I was craving just about everything in the book (that wasn’t Annie’s Mac and Cheese — this is basically what I ate for 3 nights straight). For some odd reason, pretzels came into my mind. I knew, as soon as we returned, that I was going to have to make some. So my endeavor down pretzel lane wasn’t a glorious one. I don’t know if any of you have ever taken a stab at making them, but they aren’t the EASIEST thing in the world to make. Maybe I was putting too much thought into it though. I can relate making them to making Christmas cookies. It’s like there’s a little voice in the back of your mind telling you they are going to come out a disaster. I really believe it’s one of those recipes in which you need some more hands in the kitchen. Bribe your kids into helping out! In the end, they were totally worth it. This is a great recipe for a group (like baking Christmas cookies). Kids will love helping out with them almost as much as they will enjoy eating them when they are all puffed up and golden too! So although, they were some what of a disaster while I was making them, I really think that with little tweaks here and there (and a little patience too) it really is the most perfect, fun activity for a Friday night. * Hint * This is how I spent my Friday night. Don’t judge me.

So the pretzels came out pretty spectacular (besides the annoyance of making them at the time). I think I made this pretty obvious, but the honey mustard is the best part. Honey mustard is one of those sauces that’s a lot easier to make than you may think. Surprise! Honey + Mustard = Honey Mustard! That’s really all there is to it. You can take it a bit further like I did, but if you have honey and mustard hanging out somewhere in your pantry, then you are good to go. I think a little bit of mayo is a good addition also. It makes it creamier, which I think is totally necessary for honey mustard.

A couple of things:

1. You do not have to use whole wheat flour. I used it for a little kick, but all-purpose can certainly be substituted. Bread flour will also work.

2. You can certainly try to make “traditionally” shaped pretzels. Due to my annoyance at just wanting to finish up the recipe, I did not go this route! They taste the same in the end, and I think the “bites” are way more fun! Portion control people. Portion control.

3. I did go the “traditional” route when it came to toppings. Sea salt is the way I went. You can always sprinkle with cinnamon and sugar and serve with chocolate sauce. Well…hmmmmm…there’s an idea =).