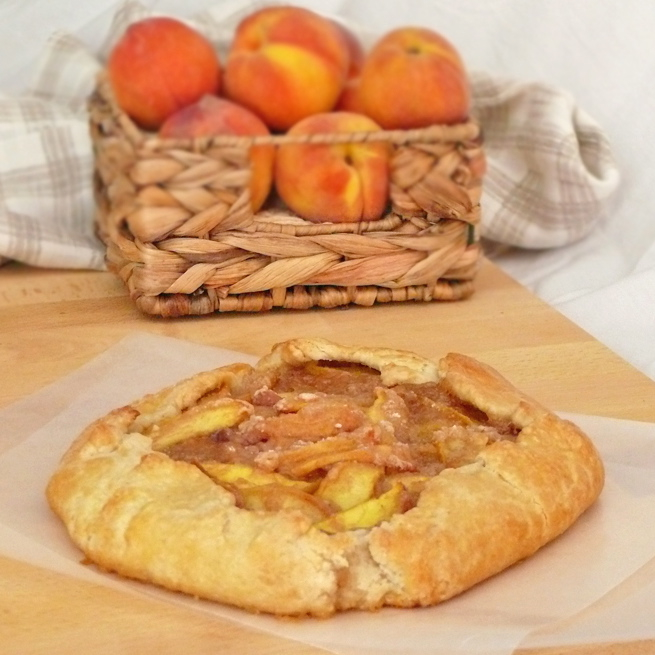 Peaches were 49 cents a pound at Sprouts. As a result, I had to do something with peaches. They are NEVER that cheap. I almost didn’t believe it. Almost. We are getting into that prime peach time here in Colorado. We’re almost there. We still have a couple of weeks to go, and if you weren’t aware, they grow some of the most amazing peaches on the Western slope of the Rockies (a lot of great fruit grows there by the way). We have great peaches, and we love it. Pies aren’t my FAVORITE thing in the world to make. They usually take way too much time and way too much work…Until I discovered the beauty that is the “rustic tart.” I love how you can put “rustic” in front of anything and it immediately becomes “ok.” It’s really the same thing as a pie. The crust is the same. The filling is the same. The only difference is that the filling is not completely covered in pie crust. Oh and it’s normally not baked in a pie dish either. Where I am getting at with all of this, is that I decided to make a rustic peach tart. I love peach pie and this was the perfect alternative. We paired it with a delicious beer we picked up yesterday and this tart couldn’t have come out any more special.

I had to. Cilantro was such a great helper today =).

So, I hope everyone had a great 4th of July! I know that we did. I’m sure most of these get togethers will carry on into the weekend. I am slowly, but surely recovering today. In my world, recovery = rustic peach tart baking. If you are in charge of dessert at your upcoming picnic and haven’t quite decided what to make, try out this recipe. You will be surprised at how simple it is. Peaches couldn’t be any more American (other than maybe apples), and anyone who tastes it will be immediately hooked (if they like peaches, but who doesn’t like peaches?? that’s just weird). I also suggest, topping this bad boy with vanilla ice cream. There is no other way to go.

Also, don’t be scared of pie crust. It’s one of those few dough recipes that you WANT to be crumbly, which means you don’t have to work so hard at incorporating all the ingredients. I understand the want to go the pre-made pie crust route, but try making it homemade just once. You will be so glad you did.

Let’s talk beer because I’m super excited for this beer pairing. Zach and I were browsing around the liquor store yesterday and a cute little number caught our attention. HE’BREW’s Rejewvenator Dubbel Doppel is the beer that was so mesmerizing. I LOVE HE’BREW. They are part of Shmaltz Brewing, and Shmaltz Brewing almost never disappoints. This beer had me at “brewed with dates and figs.” Anything with dates and figs involved has my immediate attention. It’s a Belgian Style Dubbel Ale and a Doppelbock European Lager. That’s right. It’s like a two for one special. It’s glorious, just glorious. If you see this at the store, pick up a bottle and don’t think twice. Oh and then go ahead and pair it with this rustic peach tart. Win…win…win.