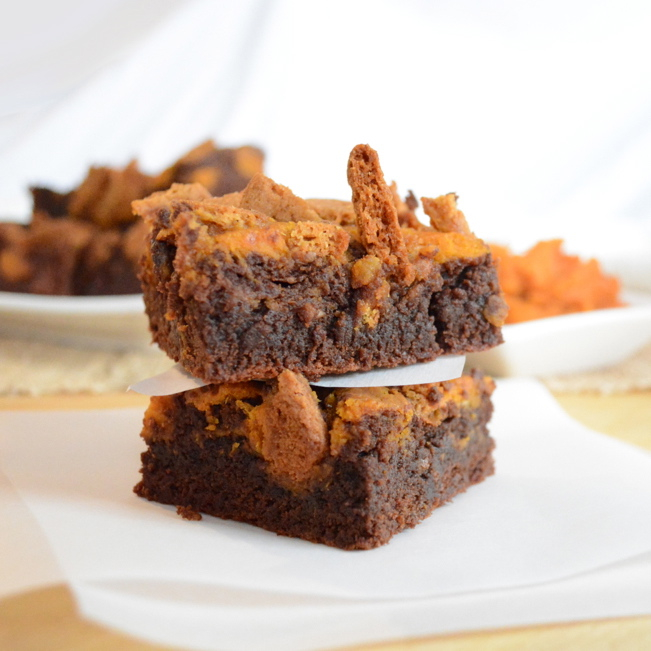 Chocolate Pumpkin Brownies…with ginger snaps. I think my favorite part of this time of year is all the warm ingredients you get to start using that you couldn’t use over the summer. The summer is great for 100 million reasons, but the thought of even turning the oven on is just plain scary. Even though today wasn’t the OFFICIAL first day of Fall, it sure felt like it. It was a cool 68 degrees (cool for how hot it’s been!). It was dreary and rainy: the two ingredients that are perfect for an Autumn day. For the next 10 posts, we are going to be focusing on Pumpkin. We will be cooking with so much pumpkin, that I am 99.9% sure we will be sick of it by post #8, but that’s ok! It’s totally worth it! Tonight we made chocolate pumpkin brownies. We topped them with store-bought crumbled ginger snap cookies and paired them with…yup, you guessed it…a pretty delicious pumpkin brew. The combination was just out of this world!

Fun Facts (if you want to call them facts..they are more like opinions):

1. Yes, you have to use pumpkin. This is not an option.

2. Canned pumpkin puree works just fine. I mean, pumpkins aren’t even “in season” yet, so canned pumpkin is pretty much a must. I like to stock up on the stuff. It tends to go on sale this time of year and is great for homemade lattes, cakes and pies (duh).

3. Yes, you have to pair this with a pumpkin beer. Is this even a question?

4. I highly recommend making the homemade brownie recipe that I have provided below. It is however, very time consuming. If you are in a time crunch, you can most certainly use a store-bought brownie mix. Follow the directions on the packaging and then continue with my instructions for the pumpkin mixture. Your timing and oven temperature may vary though.

5. Line your baking dish with parchment. It will be worth it! I promise! I also suggest leaving a little overlap on each side of the dish. This makes it easier to remove the brownies from the pan when all is said and done.

Ok I think that is all. You can most certainly shoot me any questions if you have them.

So, with the Fall season comes Fall beers, and Fall beers usually translate into Pumpkin beers. I think that Pumpkin beers (ales and lagers) have become a style all on their own. Last year, Zach and I did a beer tasting of pumpkin beers (you can find this act of brilliance here (=) and what we learned was that just because there is “Pumpkin” on the label doesn’t mean that it’s a good pumpkin beer. For these pumpkin beer and food pairing posts, I’ve decided to stick with my favorite pumpkin beers. For today’s beer pairing, I decided to go with New Belgium’s Pumpkick. It caught me be surprise at how much I loved this beer. I was scared at first.This is mostly because I saw it on the shelves in July, but it was like love at first sip. It has some great hints of pumpkin spiciness. It is smooth and caramel(y), which makes it just decadent enough to pair with these decadent brownies!

Tomorrow we’re making pumpkin granola. That’s really all I have to say about that…Until then, have a great night everyone!