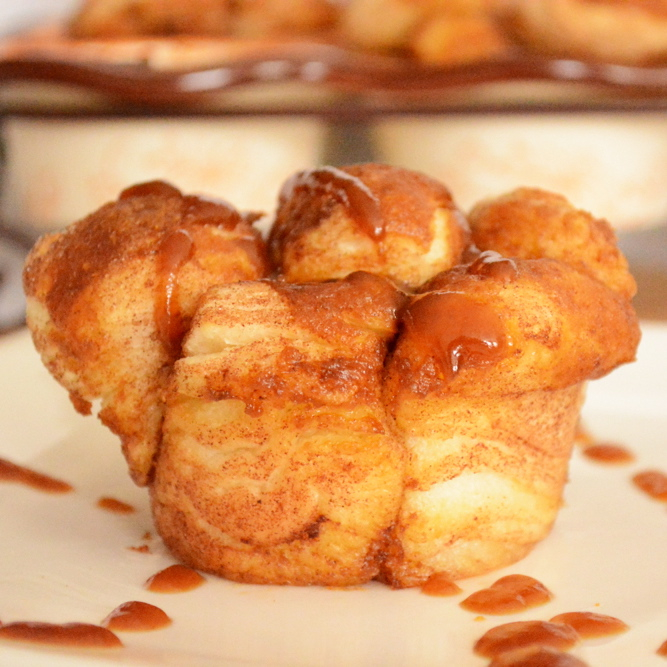 I don’t know a soul out there who doesn’t absolutely adore monkey bread. It’s gooey and sweet, messy and delicious. It’s a favorite among most. I don’t know this for sure, but I can speculate. When I found out that Zach has never had monkey bread, I almost had a panic attack. Not kidding. I may have cried for him for just a minute (not really, but I wanted to). Therefore, I had to make monkey bread; but because there are only two of us, I decided to go the monkey bread muffin route instead. And because we are on this pumpkin kick, I decided to make a pumpkin spice version instead. Traditionally (and I use this word loosely, because I’m sure most families have their own version), monkey bread is made in a bundt pan. The recipe I know of usually involves a ton of butter, sugar and canned buttermilk biscuits. This recipe is just a tad different. It is full of all those great Fall flavors: nutmeg, cinnamon, clove and allspice. I used mostly brown sugar (because I prefer it) and popped them in a muffin tin instead. We paired this dessert with one of my favorite beers of all time, so read ahead for more!

I may have cheated just a little and used canned biscuit dough instead of making my own. I usually don’t do this, but in this case, I think it is totally ok. There’s just something about canned biscuits that you can’t get with homemade dough. Oh, and it’s simple and it tastes delicious too. You can make your own dough if you wish. There are a lot of great homemade recipes out there. They obviously take a little bit more time, and I was very impatient today. It was another one of those “I just want it now” moments. Either way you decide to make them, just make them. They are perfect any time of day and they make you feel all warm and fuzzy inside. Or maybe this is just me…

I have paired with Rumpkin before, and I’m sure that I will pair with it again. It’s one of my favorites, and because it’s only released once a year, it’s a good beer to stock up on. Avery is always solid in their barrel-aged releases, and Rumpkin is no different. Hints of rum and pumpkin collide in this delicious after-dinner sipping beer. It’s great with desserts and other sweet things. It’s official release date is this Sunday, and we are super excited about it. If you see a bottle on the shelves of your liquor store, pick one up. You won’t be disappointed!

Have a great day everyone!