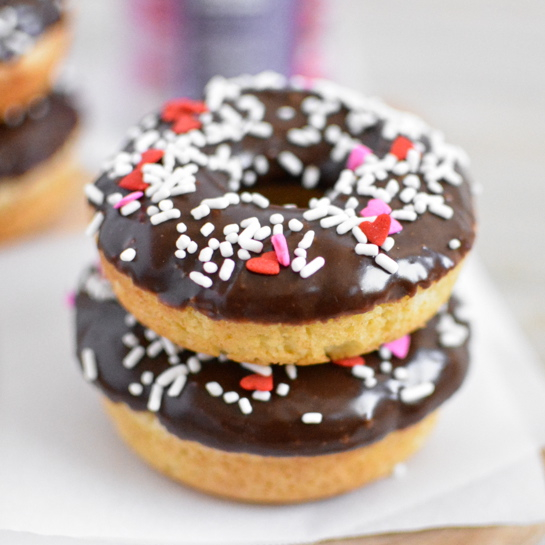 I’m on my own for a week. Zach is in Atlanta, and I’m already bored. Sure, there’s that whole thing called the “Superbowl” on tonight, and yeah it will be fun. I’ve already made myself enough snacks to feed 12 people. Did I mention that it’s only me? It’s ok. January is over, and February is all about splurging once again. As a result of it being my first day on my own, I decided to make donuts and catch up on all of the TV shows I don’t like to admit that I watch while Zach is around. =) I won’t type out this laundry list of TV shows. It will both scare and bore you. I promise you this. So anyway, these donuts made the whole day worth while. They are a perfectly baked vanilla donut dipped in the best chocolate glaze ever. I added the sprinkles because Valentine’s Day is 2 weeks away, and I’m obsessed with anything pink, red and purple right now. If you are looking for a great alternative to a fried donut, these are perfect and will satisfy that sweet tooth with just one bite.

Beer: 21st Amendment’s He Said Baltic-Style Porter
Brewed By: 21st Amendment
Style: Baltic Porter
ABV: 8.2%
Description: I like the idea of a porter or a baltic-style porter as the beer pairing for these donuts. I was originally thinking a stout (a chocolate stout to be more specific) might be my best bet, but I wanted something just a little bit lighter. I wanted a beer that was subtle, but packed full of flavor. That’s why I think 21st Amendment’s He Said Porter is perfect for the job. Now, I know this is a Fall brew and is brewed with pumpkin and spices. This doesn’t change my mind though. It is subtle in pumpkin flavor, and it has just enough of that cinnamon(y) flavor to enhance the flavor of this donut. Another great porter will do just fine if you can’t find anymore of this brew on the shelves. You’ll love the pairing. I promise. =)