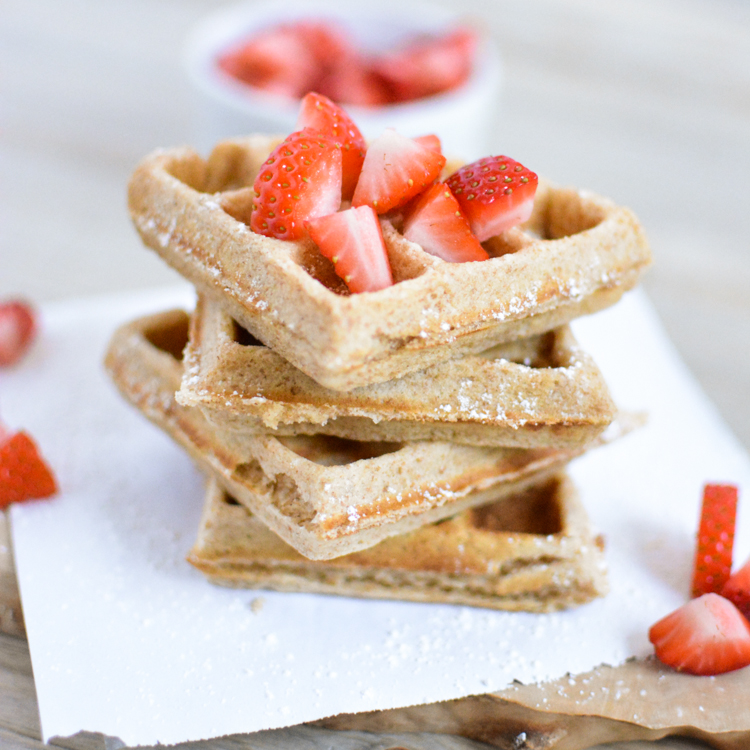 Well, it’s day two of Zach being away, and I’ve spent the entire time cooking and baking. You would think I would do this when Zach is around because at least there would be two of us to eat all of the food sitting around. Cooking and baking kills time though, so if I get fat for a week, I’m not going to complain. Today I made waffles, and I was going to wait a day or two to post this recipe, but I thought that it was too good not to share immediately. These waffles blew me away. I tried to keep them as healthy as possible by using 100% whole wheat flour instead of all-purpose, but then there’s that whole cookie butter thing that may have thrown it’s health content into the opposite direction. It’s ok though. These waffles are simple, quick and will feed a large crowd with just a few quick steps. Most of these ingredients I’m sure you already have in your pantry, and if you don’t have cookie butter in your pantry, well shame on you! Ha, I’m just kidding. But seriously, go stock up and whip up a batch of these waffles in the mean time. =)

Beer: Bison Brewing’s Gingerbread Ale
Brewed By: Bison Brewing
Style: Herbed/Spiced Ale
ABV: 6.0%
Description: I have paired with Bison’s Gingerbread Ale before, but like I said…there isn’t much better than gingerbread in a bottle. That’s exactly what this ale is. I love it with sweet treats, especially with anything that’s gingerbread in flavor. =) There is no “gingerbread flavor” in these waffles, unless you count the cinnamon. Even so, this pairing is perfect. I don’t know if it’s the cookie butter or the cinnamon, but something about the sweetness of these waffles pairs perfectly with this beer. I know we are out of gingerbread “season,” but keep this pairing in mind when the holidays roll around again. If you are lucky enough to have a secret stash, I recommend pairing with it immediately!

Other great pairings would be a milk stout like Lefthand’s Milk Stout or an oatmeal stout like Sam Smith’s Oatmeal Stout.