Happy hump day everyone! I hope you guys are having a fabulous week. The week seems to be flying by doesn’t it? At least around here it seems to be that way. I know that I mentioned recently that I have been trying my hand at more recipes that involve beer, besides the pairing of them of course. This cooking technique tends to scare me, but I’m getting better at it! It’s not my intention to ALWAYS go down the normal route of cooking with beer (brownies, cakes, chili, etc — all delicious, mind you). I’m trying to be as creative as possible, so as a result, beer caramelized onion dip. I don’t really think it needs an introduction. It’s really that good.

I have really begun to love cooking with IPAs. They are my favorite to drink and maybe that’s why I enjoy adding them into my recipes. This isn’t your average onion dip. It’s loaded with all kinds of cheesy goodness: swiss, sharp white cheddar and gruyere. In my opinion, you can never have enough cheese. The cheese is tossed with a mixture of bacon, mayo, sour cream and cream cheese…

If you’ve never had a caramelized onion, do yourself a favor, and whip up a batch. Yes it will take about an hour, but it will be so worth it. They are delicious on pretty much anything and everything.

Now if you HAVE had caramelized onions, throw beer in the next time around. Specifically, throw in an IPA. It adds such a delicious dimension of flavor that you didn’t even know was possible. Caramelized onions are ALREADY extremely flavorful, so that added beer flavor really kicks it up a notch.

Now if you are not into beer as much as I am (GASP!), I promise you, that you do not get an overwhelming bitter taste when you eat this dip. It’s hard to explain. You just have to try it. Trust me. It’s well worth you giving it a go.

Big thanks to Zachary, for being a super patient hand model. :) I think we should paint his nails next time. What y’all think?

After my lack of a beer pairing on Monday, I’m super excited to share this pairing with you today!

Beer Love:Beer: Epic Brewing’s Escape to Colorado IPA
Brewed By: Epic Brewing
Style: India Pale Ale
ABV: 6.2%
Description: Have I ever mentioned how much I love beer out of the can? Well I do. I love it, and I feel like every time I turn around there is another brewery that is starting to can. Oskar Blues has done it well…always, and other breweries are following suit. When we saw Epic Brewing’s Escape to Colorado IPA in a can, I almost had a panic attack…in an extremely incredible way. I love this IPA. I especially love it for summertime, and I especially, especially love to cook with it. I think I’ve gone through an entire six-pack in the past week because I’ve made so many amazing dishes with it. I like to cook with IPAs in general. Sure, they tend to be on the bitter, hoppy side, but they give such an astounding dimension of flavor to food. It was the perfect addition to this dip, in that I decided to caramelize the onions in it. Have you ever had beer caramelized onions? Oh dear, if you haven’t, you must try it! This IPA is fruity and funkily delicious. It also has a strong florally aroma, a note that I crave with a traditional IPA. Just remember that when you go to cook with this bad boy, buy 2 so that you have one to drink as well! The pairing is as equally delicious as it is to cook with!

I hope everyone is having a great week! Here’s the handy dandy recipe! 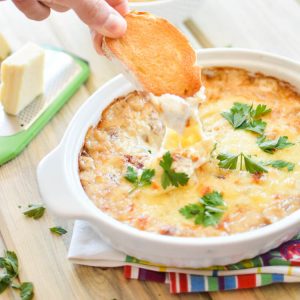