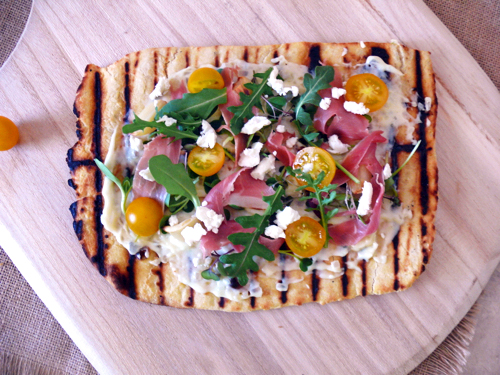 We are getting closer and closer to the big day! I have yet to figure out who I want to win this game. Part of me wants Baltimore to win because they are in the same conference as the Steelers. The other part of me hates Baltimore with a passion, so that just forces me into cheering for San Francisco. I think it will be a last minute decision. It will be fun to watch the Harbaugh brothers go at it though. That should be entertaining to say the least. Let’s get back to the point: food. I find flatbread to be one of my favorite appetizers out there. It’s really just a glorified, thin-crust pizza. It just sounds a lot cooler to say flatbread. At least I think so. Flatbreads are a very good idea when you plan on serving a lot of people; and this makes it a great idea for a game day get together. I was very excited to tackle this recipe and you should be too =).

[sc:adsense1]
I know what some of you are probably thinking. Flatbread is way to “elegant” to be a game day menu addition. I don’t think so though. You can make it as “cool” as your little heart’s desire. Besides, you’re not just trying to impress the macho football guest at your party. You want to impress EVERYONE, so you have to bring on some diversity. This flatbread is packed full of flavor, and I’m sure the macho(est) of macho men would just devour it. I’m not quite sure why I’m using the word “macho.” Who uses that word these days? I hate that word actually. I don’t even think macho(est) is a word. We will pretend for the day that it is one.

In my intro I mentioned that flatbread is a great recipe when you are trying to serve a large group of people. Any pizza is a good idea actually. What do you order out when you are having a lot of people over? Pizza and wings you say? Yup that’s what I thought; and since flatbread is a “glorified” pizza then you get the point, right? Anyway, you can knock out a bunch of these bad boys in a matter of minutes. The dough is really the only part that can take up a small chunk of your day, and it’s not even a normal chunk. It’s a super small chunk. You don’t need to let this dough rise as you would a pizza dough. It doesn’t need to chill for hours on end either. An hour should do the trick. You could probably even get away with a 1/2 an hour. You are going for flat here; not a deep dish pizza crust. Get the dough done an hour before your guests arrive, and start grilling and assembling when they arrive. It’s that easy, and I’m sure you’ll have a lot of other goodies ready to keep them occupied in the mean time =).

Flatbread, just like it’s brother pizza, can be done anyway you like. The sky is the limit, and anything you love on a pizza, you will love on a flatbread. I decided to go with a roasted garlic and arugula flatbread today. I very rarely cook with arugula. I have never been a huge fan of it’s bitterness, but I’m trying to learn to love it; and I know that many people just love the green. I decided to give it a shot. I was pleasantly surprised. There are enough sweet factors going on that it really takes away from that bitter, peppery taste that comes with eating arugula. I used the garlic sauce recipe we made for our Basil Chicken and Roasted Garlic Pizza which never disappoints and topped it with sprouts, prosciutto, goat cheese, cherry tomatoes and a balsamic drizzle (and of course arugula). What are sprouts you ask? They are just what you think they are! Normally, they are just a baby veggie (like a super baby veggie: 3-4 days old). I used broccoli sprouts for this recipe, but you can most certainly use alfalfa sprouts since they tend to be more common. Most grocery stores are beginning to sell them now, and if you really can’t find them at your local mega mart, try Whole Foods. They always seem to carry them.

I didn’t think we would ever pair something with Goose Island ever again, but here we are. We couldn’t think of a better beer to pair this flatbread with than a Kölsch and Goose Island makes a great one in their Summertime brew. This is a great summer brew and probably our favorite Kölsch out there. It is perfect for this pairing. I paired with this because it is delicious, but I know that it is almost February and the chances of landing one of these beers are slim, so any German-style Kölsch will do. I know I tell you this a lot, but shop around! Knowledge is power! The more you know what is distributed in your area the better off you will be. Goose Island is nationwide now, so if by chance you do make this in the dead of summer, give it a try.

Tomorrow is Zach’s Birthday! Woo! He will be 48…ha just kidding. I just keep telling him that is how old he is going to be. I think he’s starting to believe me. Either that, or he is just starting to ignore me. =) He will actually be 28, and I am taking a risk here and attempting an ombre cake. Should be interesting. I see frustration in my near future, but I will try to be optimistic. First, we have one more great superbowl recipe for all of you, and it’s an Asian-style wing. These little guys bring a whole new meaning to the phrase “buffalo wing.” Have a great day everyone! One and a half more days until the weekend!