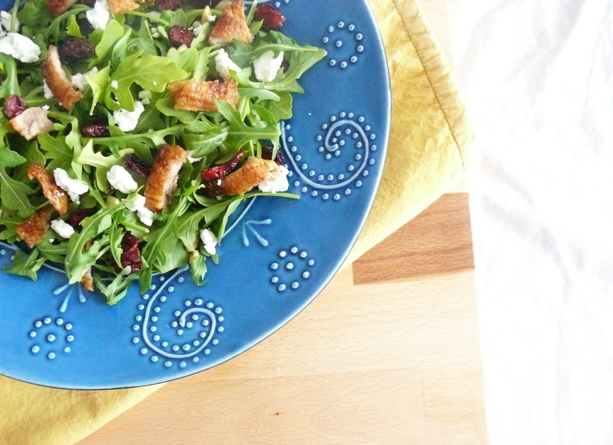 We’ve been on quite a duck kick lately. Not that I’m complaining. It’s just so freaking good. We can’t get enough of it. What’s so great about duck, is that it isn’t terribly expensive, so when we see it, we have to buy it. When we roast a duck, we usually incorporate it into a few different dishes on a few separate nights. For the two of us, we can get away with 2-3 meals with 1 roast duck. I’ve tried many roast duck recipes, but we tried a new one yesterday and it was absolutely unbelievable. It had the most perfectly crisp skin, we literally couldn’t stop eating it…even long after we were totally stuffed. Maybe the duck will only last for 2 dinners this time =). I’ll get into that recipe in just a moment. Salads are a perfect way to use up leftovers…especially meat. Duck, chicken, beef and even pork are great salad toppers. What’s so fun about using meat on salads is that it doesn’t have to be warm! It’s totally ok to eat it cold, which means a lot coming from me because I really hate cold food when it’s not “supposed” to be cold. This salad came out absolutely divine and we can’t wait for the leftovers!

So we were surfing around online last night trying to find the perfect recipe for a crispy-skinned roast duck. The Hungry Mouse has a great one. If you want a crispy skin on your duck, please follow this recipe. It will not disappoint. We didn’t have 4 hours to cook or we would have been eating at midnight, so we cranked the heat up a little bit higher than in the original recipe. You would think by now I would have come to the conclusion that if you slather something in sugar and put it in a super hot oven that you are going to get a nice brown crust. Somehow I missed the memo until now. Don’t tell. I tend to have a blonde moment every once in a while. At least now we know! Right?!

Besides the amazingness that is roast duck with crispy skin, the cherry compote really makes this salad. It’s sweet and tangy and warm. I know it can be strange to dress a salad with warm dressing, but if you’ve ever had a salad with warm bacon dressing than you know what I’m getting at. There is just something about a warm dressing that is so comforting. This dried cherry compote is a play off of that, but it’s a lot thicker. The combination of cherry compote and duck is like a sick and twisted version of Thanksgiving dinner. This is what I was thinking about as I was eating it. There was just something so comforting about it that had me going straight back to November.

I would be extra careful on how you garnish your salad. I kept it simple with pine nuts and goat cheese. There are so many stronge flavors going on that much else added would just send it over the edge. Be creative, but be careful!

So yesterday we made our special trip to the beer store for our weekly supply. I swear we don’t have a problem, but in our area the best day to go is on Sunday. Our go-to store has a special point system when you buy their products, and that point system doubles on Sundays. As the points add up you get money towards more beer. It only makes sense right? We don’t pick up Lagunita’s often. I don’t really understand why either. They make some fabulous brews. We picked up a 6-pack of their Little Sumpin’ Sumpin’ Ale. Now this beer is just magical. I don’t love wheat beers, and my stomach doesn’t really love them either, but this is like a wheat beer gone wild. It would be like if an IPA and a wheat ale got together and had a baby. It went perfectly with our duck salad and was just subtle enough to not overpower yet just strong enough to not get lost in all of the other flavors of the dish. This beer is a year rounder, so you should definitely be able to get yourself a bottle.

Well hopefully this is our last snowfall of the year. HOPEFULLY. We are looking at about a foot and it started just a little while ago. There is one good thing about all of this snow…SOUP! I’m making a bloody mary soup tonight, but it’s a total crapshoot so cross your fingers!