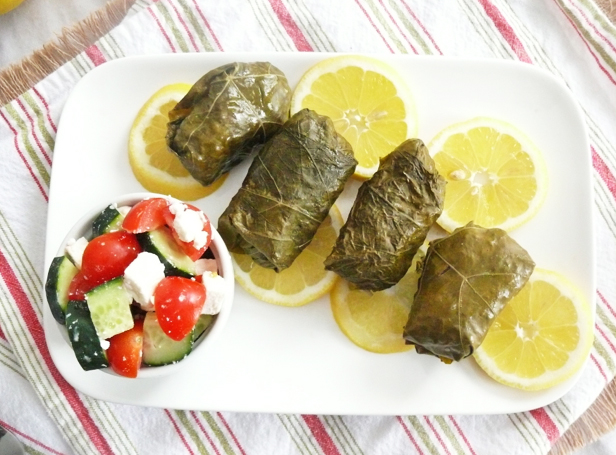 It’s still snowing. We are on day two of our Greek-fest! We are also on day two of our snow-fest! It is again snowing. Absolute insanity I tell ya. We really have to be thankful though. I mean it hardly did anything in the way of snow this past winter, and we really really needed it; especially in the mountains. We thought the ski resorts were hurting last year, this year felt like it was much worse for them. All of the snow we are getting right now, they are also getting in the mountains which is a super good thing. As much as I may complain about it, I really am thankful for it. I promise =). So onto food, we had to make stuffed grape leaves last night (or Greek dolmas). Zach’s mom loves them. I love them, and since Zach DOESN’T love them, I hardly ever get to have them. We should start making a list of what Zach DOES like at this point =). They were spectacular and we are so excited to share the recipe with you.

Did I mention that it is still snowing?

I really think Zach would like stuffed grape leaves if it weren’t for the lemon. It’s a very lemony dish and he absolutely hates the stuff. Or maybe he is just strange. We will go with the latter. I should stop making fun of him. He’s going to stop helping me if I continue to. =)

Greek dolmas are one of my favorite dishes on the planet. The word “dolma” is a broad one. I just like to refer to them as little bundles with yummies stuffed inside. Stuffed peppers can be a version of dolma. Stuffed tomatoes can also be a version. It really just depends on what part of the Mediterranean of Mid-East you’re from. I think we may be experimenting with other variations here in the very near future.

What is unfortunate but also extremely fortunate as well, is that I only started eating stuffed grape leaves about a year ago. I actually never even heard of them until I had dinner at Zach’s parents’ house one night. Zach’s mom whipped up a batch and I was hooked. She even sent home a couple of jars of grape leaves with us. So she is here now visiting and we whipped up a batch last night. I’m not going to lie. They aren’t the easiest thing to roll up. It certainly takes some patience and practice. I don’t quite have the knack for it yet so it takes me longer than most. Zach’s mom on the other hand can roll literally 50 of them in a minute. Well maybe she’s not that fast, but it felt like she was that fast!

I think the best way to approach rolling up dolmas is to begin by separating the leaves from one another as you go.

1. Take one leaf and lay on a cutting board or large plate, textured side up.

3. Take the bottom, left-side of the grape leaf and fold it over the meat mixture. Do the same with the bottom, right-size.

4. Now take the entire left side and fold over and do the same with the right and begin to roll away from you. You want to form a tight cylinder, but not so tight that the grape leaf rips, so be careful as you roll.

5. As you complete your dolmas, lay them seam side down in a 5 quart dutch oven. As you lay them, keep them nestled up next to one another. In this case, it is ok to overcrowd. Cover the entire bottom of the pot, then begin another layer on top until you have used up all of your meat mixture.

Let’s keep all this lemony-ness going and pair with a beer that has a lemony flavor. Well at least I think it has a lemony flavor. Rogue’s Yellow Snow IPA is the perfect pairing for this dish. Not only did I think an IPA would be a perfect beer pairing, but this IPA has stronger hints of citrus than most others (at least I think so). I thought the lemon on lemon would be perfect. It is a winter beer however. Chances of you getting your hands on one are super slim, so anything you can find that is a smidge comparable to it will do just find, and if you are at a complete loss, just try an IPA!

We’re making baklava today. Post will be up tomorrow!