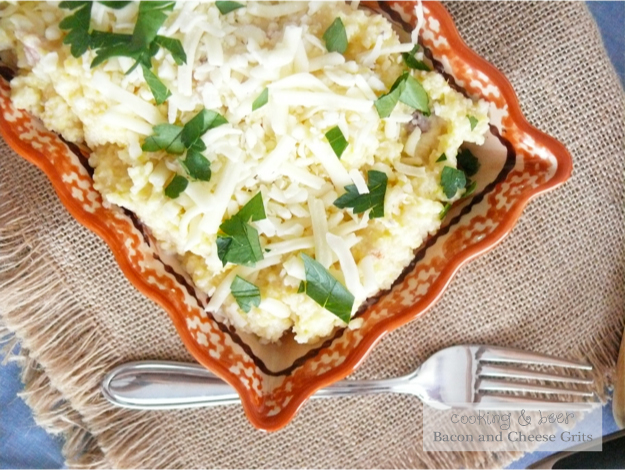 Grits have to be one of the most magical foods on the planet. That’s right, magical is really the only word to describe them. They are especially magical when you pack them full of cheese and bacon =), and that is just what we did! You seriously can not go wrong with the amazingness that is cooking grits. Number one, they are almost impossible to screw up. I really don’t need to go any further than that, but I will because I want to. Number two, you can literally eat them any time of day. By using this recipe (especially with the additions of cheese and bacon), you can eat them for breakfast, lunch, or dinner…and also at 3 in the morning. I won’t tell anyone, if you won’t. Number three, they are sooooo super super cheap to make! Corn meal? Really, you can’t get much cheaper than cornmeal: which is all that grits really are. I bet you didn’t know that, or maybe you did. Either way, let’s pretend that you didn’t.

What’s the difference between polenta and grits you ask? Not a heck of a whole lot. They are literally the same exact thing (in my mind at least they are the same thing). They both use boiled cornmeal. A lot of people may argue that polenta tends to be cooked with yellow cornmeal, where as grits tend to be cooked with white cornmeal. In actuality, that still really means they are the same exact thing. It all depends on your style of cooking them that differentiates between the two. This is the only way I can honestly explain the difference. Polenta tends to be boiled and then grilled, fried or baked. When cooking polenta, you usually have two steps of cooking. Grits are more like a soft porridge that are usually loaded with butter and a bunch of other creamy greatnesses.

Who really cares in the end, when they are both superbly scrumptious! So let’s start paring beer shall we! Well, Zach and I love the Bruery and every single thing about the Bruery. We are so sad that we live in an area that we can’t take them up on some of their special releases, but we are also super happy that we live in an area, where they tend to distribute some really great stuff. So it’s pretty bittersweet as you can tell. We just got our hands on White Oak, and it is absolutely deeeeelish. Many like to call it a Wheatwine. To me, it takes on a Barley Wine style ale type of taste; which is totally why I’m in love with it. I thought a “wine-like” brew would go great with the grits. Wine goes great with cheese. This recipe has a ton of cheese in it. Do you get what I’m saying? It’s like a match made in heaven. I’m thinking that next time I make polenta or grits, the corn meal is getting cooked IN the beer. This could be a disaster. I’ll let you know how it plays out =).

Anywho, I hope everyone is enjoying the start to the week…or trying to at least! Sorry I missed all of you yesterday, the lighting was just awful for the photos I wanted to take. I’ll try to plan ahead next time =).