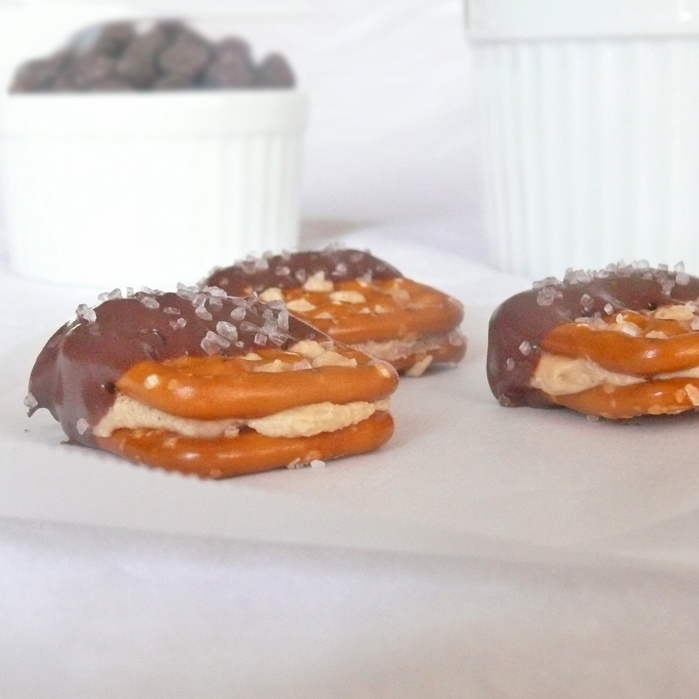 I say “bundles” because I didn’t know what else to call them. I was craving something super sweet today, so I went a little crazy. Actually, I went crazy in the form of pretzel bundles, vanilla bean cookie sandwiches and cheesecake bars (which will be up later this week). I know, it’s a good thing I run a lot. Anyway, I’ve seen quite a few recipes out there for pretzel “sandwiches” or “bundles” or whatever you want to call them, but I thought I’d spice things up a bit today and make my version of the whole shebang. These pretzel sandwiches are stuffed with a delicious peanut butter filling, dipped in a melted chocolate and Nutella concoction and sprinkled with a bit of coarse sea salt. You really can’t go wrong with these little guys. They are unbelievably easy and you can easily knock out 100 of them without blinking an eye. Well you might blink a couple of times, but you get the point. They keep for a couple of days and taste great at room temperature or cool as a cucumber. We paired them with a magnificent milk stout. You can’t really go wrong there!

So what goes into a peanut butter filling? Well you could either check out the recipe below or you could go here because if the recipe looks familiar, I’ve definitely used it before in my Sea-Salted Peanut Butter Brownie Bars. If you don’t care to read ahead then the peanut butter filling is a mixture of creamy peanut butter, unsalted room temperature butter, cinnamon, nutmeg and confectioner’s sugar. Pretty much every amazing ingredient known to mankind. Sounds pretty heavenly right? Yeah, I thought so too.

I had to incorporate beer somewhere in this recipe and I thought a milk stout was the perfect way to go. Southern Tier is at the top of my list in quality. They absolutely never disappoint. It’s really a crying shame that they don’t distribute out here, although maybe it’s not so bad, since we would probably be broke if they did. They make a great milk stout. It’s so great because it goes above and beyond “milk stout” to a “double milk stout” in the form of 2X Stout. I know it’s a lot to take in, but it’s worth the effort. This beer is so smooth and satisfying. I really think it makes the perfect dessert beer. I would even go as far as drizzling a tablespoon or two of the beer into the chocolate/Nutella mixture. Hey, now there’s a thought! Next time. I don’t know why I think of these things after the fact. Oh well.

Well it’s been a great weekend, but it’s now time to get back to reality…the reality that is the kitchen. Not such a bad reality now that I really think about it! I hope everyone enjoys the rest of their Sundays and has a great week!