Because it’s Wednesday, french toast sticks seemed only appropriate…pumpkin spice and buttermilk french toast stick with apple cider maple syrup that is. How is that for a mouthful of a title? I find blog post/recipe titles difficult to come up with. It’s like, I want to include everything! I would feel bad for the apple cider maple syrup, if I left it out. I mean that’s half of the recipe and equally as delicious as the french toast sticks. My life is a struggle. Can’t you tell? Anyway, I’m totally obsessed with this recipe and you will be too. I promise.

I don’t think you get much more decadent than french toast, and when french toast sticks come out to play, the decadence just gets elevated while the work it requires to make them starts to diminish.

I make french toast sticks quite a lot for breakfast and the reason for this is the ease in which you can whip up a batch.

They are soooo easy, and in this case, the deliciousness outweighs the work times a million. 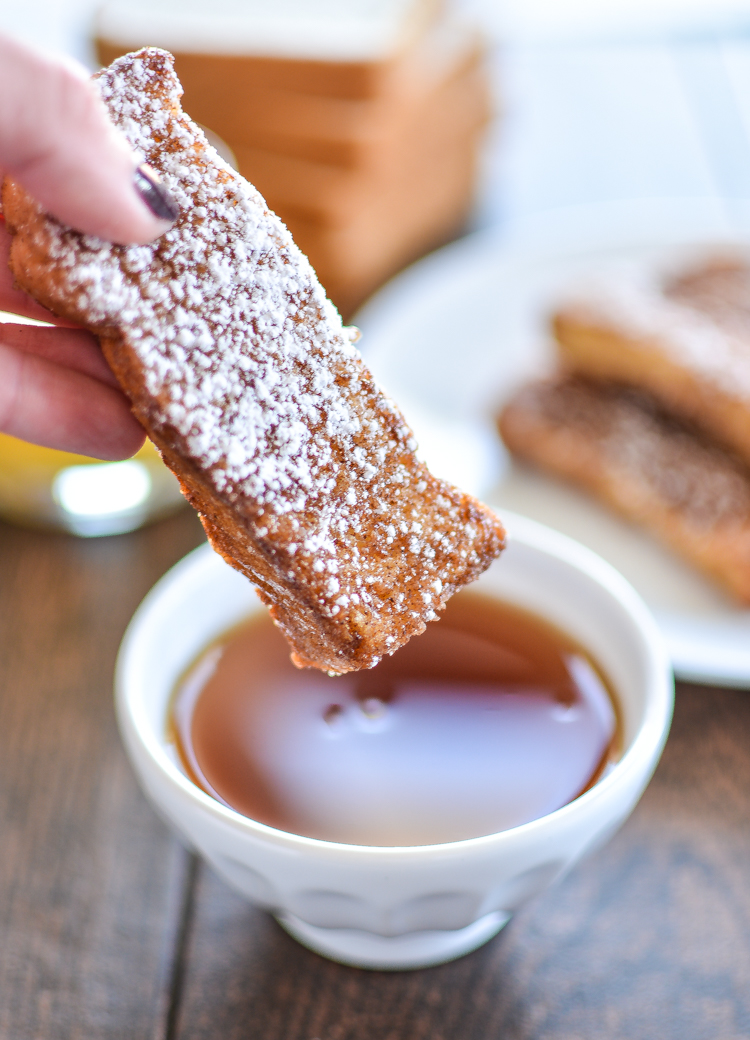 I may be guilty of buying frozen boxed french toast sticks in the past, but I will just blame that on being a poor, lazy college student. I didn’t cook much in college. I’ve always had a real passion for the art, and it’s been almost 9 years since I’ve stepped into a classroom (thank God). I hardly ever turned on my oven (unless frozen french toast sticks were involved) or used any sort of kitchen appliance unless that kitchen appliance started with “m” and ended in “icrowave.”

This is funny since I don’t even own a microwave these days, but we’ve been down that road before. Haven’t we?

I mean these homemade french toast sticks are just as easy as opening up a box of the frozen stuff. It’s crazy!

You treat these french toast sticks just like you would any ordinary french toast recipe, except that after you dredge the bread in an egg mixture and before you place it on the griddle, you coat it in a sugary, pumpkin spice mixture. This part is key. French toast is flimsy. We all know this. When you caramelize that sugar coating as it sits on a hot griddle, the edges harden up while the center stays soft. It’s the best of both worlds, and it’s just glorious.

Beer Love:
I definitely wanted a beer on the sweeter side for this beer pairing, and I thought that an oatmeal stout would be perfect for the job. A sweeter stout only enhances the flavor of these french toast sticks, and although I would normally pair a pumpkin dish with a pumpkin beer of some kind, I thought that it might make for a little too much pumpkin flavor…if there is even such a thing. I don’t know. You tell me. If a pumpkin beer strikes your fancy, then go for it, but an oatmeal stout has that breakfast(y) touch that pairs just perfectly with these french toast sticks.
Mikkeller’s Beer Geek Breakfast
Troeg’s JavaHead Stout
Firestone Walker’s Velvet Merkin
Elysian’s Dragonstooth
Rogue’s Shakespeare Oatmeal Stout
Don’t miss a post! Follow along on social media!
FACEBOOK | INSTAGRAM | PINTEREST | TWITTER | GOOGLE+