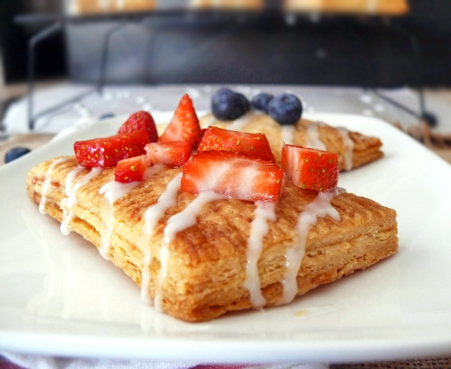 So I lied before. I thought I was getting better from what I think was still the flu, but I was completely wrong. I have spent the last two days pretty much bed ridden, but I can honestly say that I think I am FINALLY getting better. No where near 100%, but I can at least move today. Thank God. Zach on the other hand, is a different story. I think that he is getting exactly what I had, pour soul. Hopefully he doesn’t get as bad as I was. So I clearly didn’t get the memo that you shouldn’t be eating a ton of sweets when you are recovering from said flu, but who cares. I decided to do what everyone else is doing these days and make an attempt at making my own pop tarts. I mean how hard can it be? It’s a pop tart: childhood’s favorite enemy. They are sugary, delicious and sweet. They are every child’s dream breakfast snack! Well, they really aren’t as easy to make as one might think; or maybe I was just frustrated because I’m lacking in energy from being sick; so they just seemed like they were harder to make. Either way, I’m going to tell you how to do it. I’ve paired a great beer with them and topped them with a perfect glaze. They really are the perfect homemade pop tarts.

[sc:adsense1]
It’s important to be patient with this recipe. The dough kind of reminds me of a pie crust dough. You will use cold butter instead of room temperature butter, and you want this because you want a flaky crust. As far as filling is concerned, the sky is the limit. I am a traditionalist and like the fruity fillings. I don’t get this whole s’more and cake batter filling deal. They just don’t scream “pop tart” to me. There are a couple of ways to prepare the filling. I see that many people mix their jam with corn starch and water over heat to get a thicker consistency. You can go this route if you choose. I prefer the lonesome preserves route. Nutella is always a good filler as well. One great thing about this recipe is that the dough keeps for a couple of days when refrigerated and keeps even longer if frozen. So make the dough ahead of time and come back to it!

I did go ahead and pair this recipe with a beer. Zach was kind of iffy on the whole thing, but then he changed his mind quickly when he suggested the perfect beer. We have yet to pair something with Mikkeller’s Beer Geek Breakfast. I absolutely LOVE Mikkeller. It’s too bad they are in Denmark. Actually it’s probably a good thing they are in Denmark. I’d be broke if we lived in Copenhagen. Mikkeller is one of those craft breweries from overseas that actually doesn’t disappoint. You can get it just about anywhere in the United States, and they have some fabulous beers. Beer Geek Breakfast is the perfect beer for breakfast. I’m not even kidding, and if you’ve ever had Beer Geek Brunch…oh my. That brew is even better. Just remember when you are in the liquor store, that it is an imported brew, so you aren’t going to find their stuff with the likes of Dogfish Head and Rogue.

One thing I learned from making these, as that they really don’t resemble a pop tart at all. If anything, they remind me of a toaster strudel. I don’t really mind though because growing up I liked toaster strudels a heck of a lot more than I liked pop tarts =).

Well this week has certainly flown by, so I hope all of you have a fabulous Friday and a fabulous weekend!