Russet potatoes are baked until tender, cooled and then cut lengthwise into thirds. After they are brushed with butter and then broiled, a healthy dollop of a ground beef mixture that resembles the taste of a classic bacon cheeseburger is placed on top. After the potato skins are sprinkled with cheddar cheese, they go under the broiler again where the cheese melts to a gooey perfection. These bacon cheeseburger potato skins are a must-make for game day!

I have to really thank Zach for this recipe. I was recipe planning and getting my calendar all ready to go for the month of October, and I asked him to help me think of a good game day or appetizer recipe. I asked him what his idea of the perfect game day food would be. Of course, he couldn’t decide. He never was very good at making a decision, so he flopped from cheeseburger sliders, to potato skins, to fried pickles, and back to cheeseburger sliders. Around and round it went.

This is when he came up with a brilliant idea. Why not make a potato skin and bacon cheeseburger mash-up?! 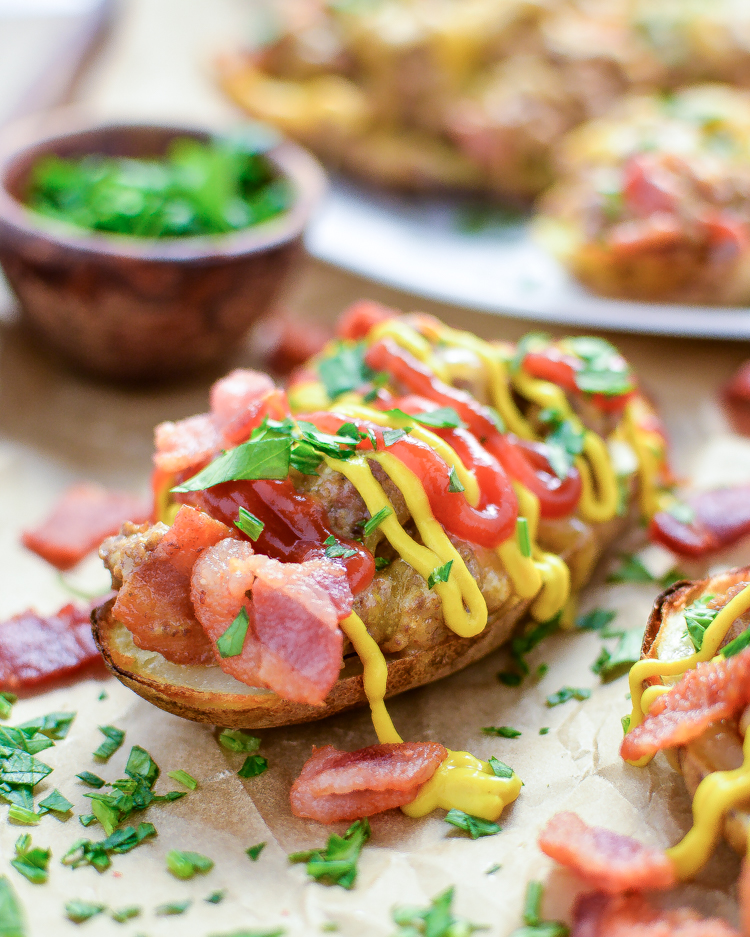 I told him he was a genius and then sent him back to his room. ;) Just kidding, but you know.

I was hesitant at first with this recipe. I didn’t think it would work right. Have you guys ever had cheeseburger soup? I’ve never posted a recipe on this here blog, but I have made it a ton of times. I was kind of going for that effect. In a cheeseburger soup, you usually dump the ketchup, mustard (sometimes relish) right in. This is just what I did with the ground beef mixture for these bacon cheeseburger potato skins.

You guys. It tastes like a freakin’ cheeseburger. It actually tastes like you put a bacon cheeseburger on top of a big french fry. I mean seriously!? How can this be bad!? … and it wasn’t bad. It was literally the best day of my life.

Recipe for these bacon cheeseburger potato skins is below. I hope you guys become as obsessed with them as we are. Pair them with either a pale ale (for some hoppiness) or a traditional Helles Lager. Although these two are quite different, they both pair spectacularly in their own special ways. I’ll talk to you guys on Friday! Have a great day! xo 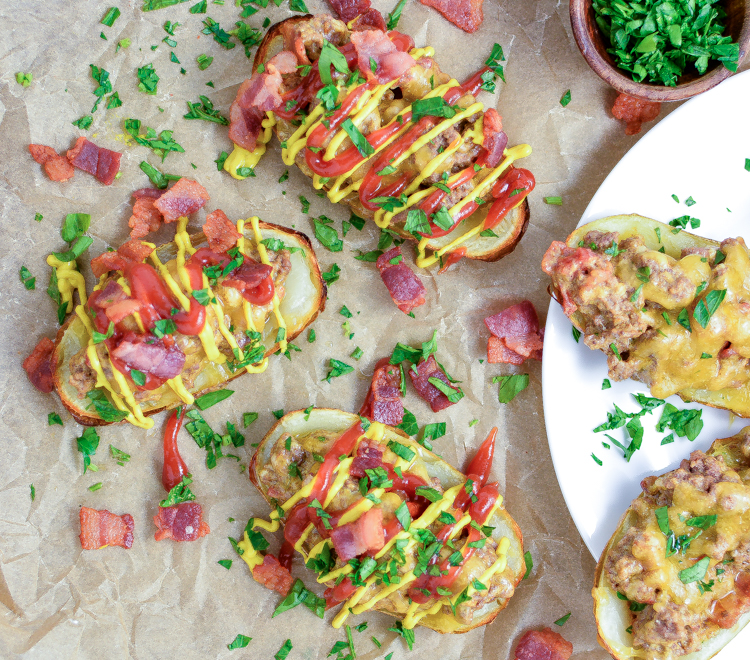 Potatoes can be baked up to 2 days in advance and stored in the refrigerator until you are ready to make your potato skins.
Print Pin Rate
Prep Time: 20 minutes
Cook Time: 1 hour 30 minutes
Total Time: 1 hour 50 minutes
Servings: 8 potato skins