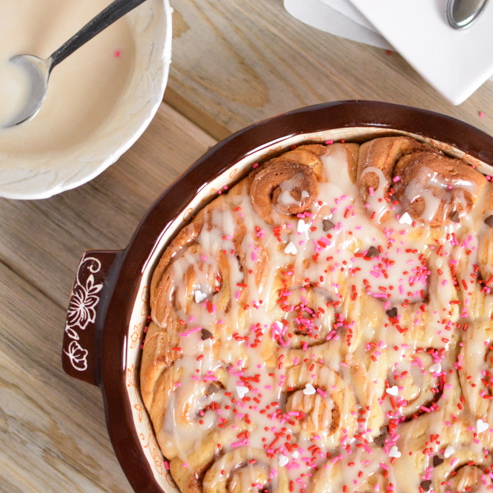 Because of the disaster that was the beginning of this week, cinnamon rolls decided to add themselves to my menu. They were necessary…completely necessary. They also did their job perfectly. Half of them are gone already, and I may or may not have eaten three of them in one sitting after they popped out of the oven yesterday. I’m not complaining. They were mandatory…in my mind, they were mandatory. Anyway, cinnamon rolls are great, if you can wrap your head around them. They usually aren’t the easiest recipe in the world to tackle, and they do take some time. Let me just tell you…they are TOTALLY worth the pain and suffering. In all seriousness though, this recipe is probably one of the easiest you will follow. If easy and cinnamon rolls can go together in the same sentence? This, I do not know. Did I tell you they were worth it? Ok, good. They are perfect for a Sunday morning, and even better if you have guests over for brunch. Whip up a batch sometime soon, or tomorrow…your choice.

Beer: New Holland’s Dragon’s Milk
Brewed By: New Holland
Style: American Double/Imperial Stout
ABV: 10.0%
Description: I’m a sucker for anything bourbon barrel-aged. I’m usually drawn to these beers. I have paired with this imperial stout before, but I knew that I had to pair these cinnamon rolls with it as well. It’s like a match made in heaven. I think what most made me realize that these two would make such a fantastic pairing, was the deep vanilla notes this brew provides. It only compliments the sweetness of these rolls, without overpowering them. It’s a great pairing!