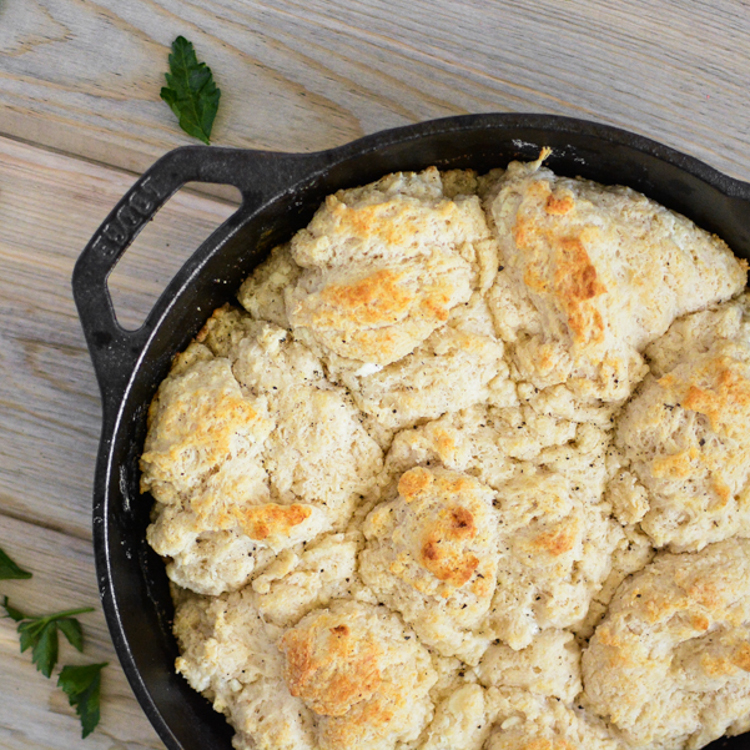 Here is another instance where I decided to cook with beer. I know! That’s twice in one week! I don’t know what to make of this, but let’s just go with it. This won’t become a common occurrence by any means, but it’s fun to go crazy once in a while. So anyway, as I dive into this new thing called “cooking with beer,” I thought that biscuits would be an easy way to not screw up. Boy, did I not screw up. It’s fun when things go the way that you plan. These biscuits are a play off of my Rosemary and Cheddar Drop Biscuits. This time, I removed the cheddar and rosemary, and added goat cheese instead. I also threw a brew into the biscuit dough. This was a fun and most necessary addition. These biscuits are easy. Like, probably one of the easiest biscuits you will make. Instead of cooking them on a cookie sheet, I threw the biscuits into a preheated cast iron skillet. They plumped up so perfectly, and were spectacular. They are perfect for breakfast, lunch or dinner…or a 3pm snack…which is how I tend to eat them. The way I enjoy them best, is with a fried egg and some fresh arugula. Other great ideas would be sausage gravy (also delicious – who doesn’t love biscuits and gravy!?), butter and jam/preserves, goat cheese (why not throw in a little extra), or all by themselves. They are really that good.

Beer: Bison Brewing’s Hop Cuvée
Style: West Coast Ale / American Pale Ale
ABV: 5.5%
IBUs: 50
Description: Just like when I pair beer with food, when I cook with beer, I think about the flavor profiles of each beer and think about how they will enhance or take away from the flavors in the food. Some dishes are easy. If you have a piece of chocolate cake, you can pretty much guarantee that a good chocolate stout will pair well with it, where as an IPA may not. I wanted a beer that had a touch of bitterness, but nothing that was out of control, like the out-of-controlness that can come with an Imperial IPA. A pale ale was the perfect brew for the job. Thanks to our good friends over at Bison Brewing, we had a chance to try Hop Cuvée. It has those piney tones that you crave with an American Pale Ale, but still has hints of sweetness and citrus. It’s delicious in each and every definition of the word. It was the perfect addition to these biscuits. It gave them so much flavor, that I kept going back for more. I also highly recommend that you wash them down with a few gulps of Hop Cuvée. You won’t be disappointed with this combination!