Grilled Eggplant Salad with Mustard Vinaigrette
Just Me, Cilantro and a Polenta Pizza this Monday Evening 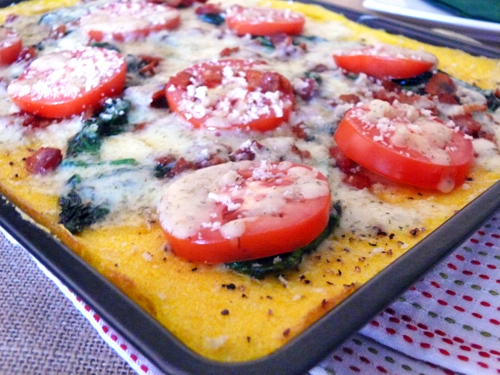 Well Zachary has left us yet again. He’s off to Texas for a couple of days, and I’m here holding up the fort (or is it “down the fort,” I never really understood that saying). Well not really a fort, but a condo with a dog and some beautiful sunny, yet cool weather. It really was a beautiful day. Zach and I were supposed to make pizza last night before he headed off this morning, but we were lazy and boring and decided to order in instead. I didn’t hate this decision. We certainly needed a break. I decided to stay with the pizza theme and make something super yummy today, but instead of going with our traditional pizza crust (which is positively delicious by the way if you haven’t tried it out yet), I decided to go with a polenta crust. By topping it with fresh ingredients, I really felt like I was back in the middle of July, instead of the middle of January. It was a fun feeling for a brief moment, until I headed back down to reality.

[sc:adsense1]
Using fresh fruit and veggies in the middle of winter can truly make you feel like your back to summer. That’s exactly how this pizza made me feel. The crust was light: a baked layer of polenta mixed with salt, pepper, oil and a dab of butter. The toppings I decided to use just took the pizza to the next level. When I was at the grocery store today, I decided I would find whatever looked freshest and most delicious and use that to top my pizza. I should take this approach more often! Boy, did it work out well! For some reason unbeknown to me the roma tomatoes looked spectacular, and they were. I decided I would go with an Italian theme: sliced roma tomatoes, some minced garlic, sautéed spinach, fresh cheeses and smokey pancetta. The added panko at the end brought it all together.

I was debating on whether or not to use the panko bread crumbs, and then I came to the realization that the pizza definitely needed some crunch. Yes, the pancetta was super crispy, but it just wasn’t crispy enough. There are a lot of “soft” ingredients in this recipe. I originally wanted to go completely gluten-free on this pizza, so if you want to skip the panko or use a gluten-free version go for it. I really think the crunch from the panko was required in the end.

The same goes for the pancetta. It is very easy to make this dish vegetarian. Just delete the pancetta and there you go! I like the added salt factor, but there is enough salt from the cheeses that I’m sure you won’t miss it too much!

As far as the cheeses are concerned, I would go with whatever you love the most. I was really craving some gruyere and havarti today, so that’s what I went with: a dill havarti to be exact. I just could not pass this up once I saw it! If I were choosing cheeses though, I would go with one hard cheese and one soft. It will balance out in the end. Trust me.

I decided to go with an IPA (double) for this beer pairing in Dogfish Head’s 90 Minute. I wanted something full of flavor and “hoppiness,” but I didn’t want a beer that was going to take over this pizza. It’s very easy to drink something that will overpower this dish because the flavors are so “light.” So keep it simple with this one. There is no excuse for not being able to get your hands on a 90 Minutes. At this point, I’m pretty sure you can get it just about anywhere.

I hope everyone had a great holiday weekend, and hope you all have a great week! Keep it yummy!